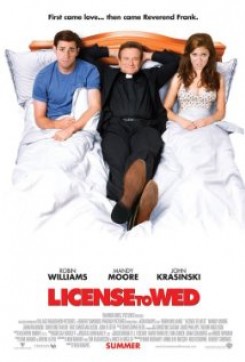 "No Animals Were Harmed" Before getting married, Sadie (Mandy Moore) and Ben (John Krasinski) decide to take some premarital classes from Reverend Frank (Robin Williams) to see if they are compatible. Instead of bringing them closer together, the experience tears them apart.

Three bull mastiff dogs were on call for the part of Reverend Frank’s pet dog. The dogs wore clerical collars, which were custom-made for each dog and very comfortable.As Ben waits for Frank in one scene, Frank’s dog jumps up on him, knocking him to the ground. A small, padded ramp was built to give the dog some extra height to jump up on the actor. A small pouch of food was placed under the actor's shirt, and the dog was verbally cued by an offscreen trainer to “get it.” The dog ran to the actor and jumped up on him, looking for the pouch, and the actor fell backward onto some mats.

As Ben lies on the ground with the dog on top of him, the dog licks his face and sneezes on him. The dog was placed on top of the actor, and an offscreen trainer held up a toy to get the dog to look in various directions. The dog was then cued to lick the actor’s face. The dog was removed and baby food was placed all over the actor’s face to simulate the results of the dog’s sneeze.Ben reaches for and throws a bag of snacks across the floor, and the dog chases after the bag just as Frank enters the room and stops the dog. An offscreen trainer cued the dog to run after the bag when the actor tossed it. All of these scenes were edited together in post-production.Later, in another scene, the dog is sitting in the back of a parked van with Frank and a choir boy. The dog was placed on its mark and the trainer stood just outside the van while the scene was filmed.As Ben enters a resort in Jamaica, he passes two peacocks in the courtyard. This scene was filmed at a real resort and the peacocks lived there.