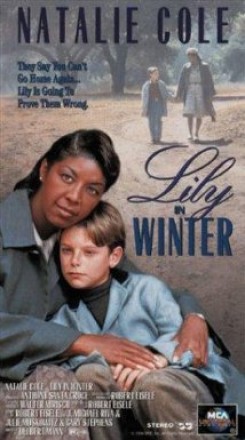 Lily In Winter is a sentimental story set in New York and Alabama in 1957 before integration. Lily is a resident maid/nanny in a swank apartment in New York, employed by workaholic parents who have a son, Michael, about 7-years old. We quickly find out that Michael has a very strong emotional attachment to Lily, in part due to the rigid schedule of his parents. The father is a set designer and the mother an actress. The story really starts when Michael and Lily are in the kitchen with her brother, Booker, and his friend, Chick. Booker has a dream of opening a nightclub in Harlem and, of course, convinces his gainfully employed sister to lend him some money for same. She does. A story of neglect emerges as Michael's father takes off to do a big "design" job and his mother begins doing matinees at the theatre. His father promises to be back for Christmas day, but must leave again Christmas night. Michael goes to his room and puts a pushpin in his map indicating where his father is going. This is the sad way he keeps track of his mother and father. Booker next appears in the living room of the apartment, an area of the home where he should not be, out of the kitchen area. He begs Lily for $2,000 which they both know she does not have in her stocking The loan sharks have beaten him up and he must have the money ASAP. He has a plan to have Lily take the boy out during the day and leave the place unlocked, allowing him to steal enough from the house to meet the demands of the loan sharks. Lily agrees and takes the boy out as planned but as they near the house, she spies a police ambulance loading someone onto a covered-up stretcher in front of the house. She panics, assuming it is her brother, and heads for the train station with Michael. She bids Michael goodbye and tells him that she must leave and he is to go back home in the cab. He protests, but she leaves him in the cab. Once on the train Lily sleeps next to a window, awaking to find that Michael has sneaked on the train and absolutely refuses to go back home. Lily lets him continue with her until she can get to her folks and get enough money to send Michael back home. In New York, Donna, Michael's mother, has called the police, as she has discovered the burglary and disappearance of Michael and Lily. It is then that we discover the ambulance was for a neighbor next door who had a heart attack. It was not Booker as Lily had suspected. Police suggest and suspect, as they tell Donna, that Michael has been kidnapped. Lily and Michael reach their destination in Alabama, Lily's home, through various modes of transportation climaxing in a wagon drawn by a mule which brings them to their destination. Home presents Lily with her illegitimate daughter, Louetta, who is about Michael's age, her mother and a dissatisfied sister bored with life in a small town. Her mother informs her that her father has died and she now has to deal with her local problems as well as the one of waiting for Michael to get homesick so she can convince him to go home in about a week. Booker arrives in Alabama with his devious friend, Chick, who talks Booker into making this a real kidnapping and stashing the boy in a hut in the woods. He agrees because it will allow him to give Lily money and help her get away from the Police/FBI, who from phone conversations with Donna and Lily, he and Lily know are looking for her and Michael. The kidnapping plot fails as Lily, Mazie, the grandmother, and the sister, Ada, quickly convince Booker of his moral error. Booker, convinced, beats up Chick in order to free Michael. The bad Booker is redeemed. Finally, Lily gets Michael to the train station where he thinks they are both returning to New York. Once he is aboard the train, she gets him to accept the fact that he must return. He leaves without the person he loves most in the world, Lily, who returns back to her daughter, intent upon making a life with Louetta. Since Michael has been away, his family has re-examined their workaholic lifestyle and revised their work schedule in order to make Michael the priority. He, therefore, goes back to a warm and loving environment. As Michael travels towards a new life, so does Lily. She makes up for lost time by bestowing all her affection on Louetta, commencing by rocking her endlessly in a rocking chair. We subsequently see Michael in his room moving a push pin to Alabama for Lily.

Mules are used throughout the scenes in Alabama. They are mostly pulling wagons and seen as atmosphere. Chickens are also seen in one scene scratching at the ground.