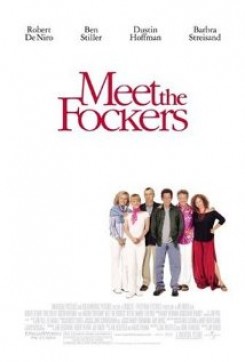 It looks like smooth sailing now that Greg Focker (Stiller) is "in" with his soon-to-be in-laws Jack (De Niro) and Dina (Danner) Byrnes. That is, until the Byrnes meet Bernie and Roz Focker (Hoffman and Streisand). The hyper-relaxed Fockers and the tightly-wound Byrneses are woefully mismatched from the start, and no matter how hard Greg and Pam try, there is just no bringing their families together—which all adds up to some disastrously funny "getting to know you" time.

Trainers rigged the paper around a small piece of elastic that fit over the cat's paw and then fluffed up his abundant hair to conceal the band.

When Jack and Dina first meet Bernie Focker, his dog Moses runs up and humps Dina's foot. Curiously enough, the hero dog, played by a Yorkie mix named Terem, is actually female! To achieve this action, the trainer shook Danner's pant leg and verbally cued the dog with the phrase "get the kitty." This prompt originated after the trainer noticed that at home, Terem liked to hump a stuffed cat toy. The trainer used food rewards to condition the dog to repeat this behavior on command.

In a later scene, the families arrive home and discover Moses humping Mr. Jinx. For weeks, trainers prepped the dog with a fake fur bolster about the size of the lying cat. Trainers first put Jinx into a down-stay position and then used the aforementioned "get the kitty" cue so that Moses would hump the back of the cat. Trainers rehearsed this action only a few times over the course of several months so the cat would not start to dislike it.

Chaos in the Bathroom

In one scene, Moses chases Jinx into the R.V. bathroom, where the cunning cat proceeds to flush the desperate dog down the toilet. This sequence required loads of movie magic. For the chase, one trainer released the cat while a second handler used a buzzer to call Jinx to the bathroom. Trainers working with the dog waited until the cat had almost completed his run before they released Moses. Because the little dog could not jump directly from the ground into the toilet, trainers set up an apple box in front of the bowl for Moses to step on and padded the inside of the toilet with diapers.

A raised replica of the bathroom set allowed the trainer to remain out of sight and hold up Moses—wrapped loosely with a towel—through an enlarged hole in the base of the toilet bowl. The trainer then cued the dog to "dig it" so it looked like Moses struggled to get out.

A special effects technician hiding under the set depressed the flush button as soon as the trainer verbally cued Jinx to touch it with his paw. To simulate the effect of Moses getting flushed down the toilet, the trainer held the dog while standing on a motorized lazy Susan-type platform.

After breaking the toilet bowl with a fire extinguisher, Bernie reveals a very wet, blue dog lodged in the floor of the R.V. bathroom. A trainer holding the dog underneath the set floor handed Moses to the actor. Trainers wet the dog just prior to the shot and kept him nestled in a towel between takes. The toilet water was tinted with non-toxic blue dye, and the color on Moses was a safe, well-tested formula created by a specialist in animal coloring.

In one scene, Jinx walks by and opens the latch to Little Jack's playpen. One trainer released the cat while a second handler cued him to hit the latch on the playpen door and then buzzed the cat out of frame.

At the wedding, Moses and Jinx sit together sharing a piece of cake. Trainers put a bit of cat and dog food next to the cake and the two animals were able to eat near each other without any tension.