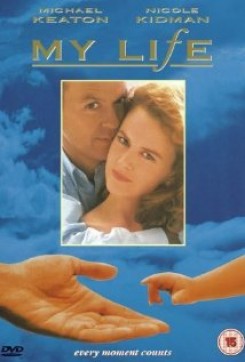 My Life, which takes place in 1963, is a very touching drama about Bob Jones, a man in his mid thirties who is dying of cancer. Bob is informed by his doctor that he has terminal cancer and that he can only expect to live another few months. This news could not come at a worse time, as Bob and his wife, Gail, are expecting their first child. Bob decides to put together a video tape that will reconstruct his life so that his unborn child will know something about him. We follow this intensely moving story to it's expected tragic ending, but all the while hoping that, just maybe, Bob can beat this horrible disease. In the end, with the aid of a Chinese healer, Bob learns his most valuable lesson, love and forgiveness, even in the eyes of death.

Animal action is minimal. In one scene Bob's parents have hired a circus act to perform in Bob and Gail's backyard. A little dog is shown wearing large cloth bull's horns on his head and jumping up at a red cape that is being held by a clown matador. The fake bull's horns were made of material that was stuffed with cotton, making them very lightweight. They were attached to a small hat which the dog wore. The dog responded to verbal cues from his trainer with food as a reward. In two other scenes, pigeons are seen fluttering past an open window.