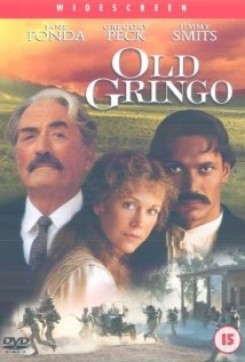 That Old Gringo never reaches its full emotional impact as a film doesn't really matter, because it fulfills in so many other ways, it is undoubtedly destined to become a film classic. Old Gringo is basically a love story, almost a love triangle, told in epic proportions against the back drop of the Mexican Revolution. Seldom are such complex characters drawn together under such compelling circumstances.

Because of the 1913 setting and locale there is considerable animal action with cattle, pigs, chickens and horses. For the battle scenes, trained falling horses were brought into Mexico from The States and American Humane was there for most of the scenes involving horses. However, there's an important scene involving the shooting of General Arroyo's horse that was filmed during the transition in AHA's Los Angeles office. Because no humane representative was present we spoke with Gregory Peck who was present during the entire filming of this scene and Mr. Peck described in great detail how the shocking effect was achieved, and he assured us that the horse, Twister, was not harmed. In addition to Mr. Peck's assurance, AHA went to the California ranch where Twister is kept so that we could observe him recreate his specialty fall. Twister performed beautifully and is in excellent condition.