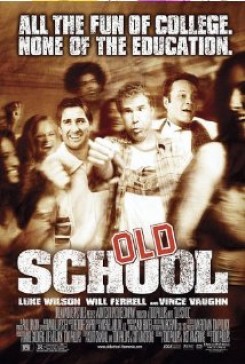 Mitch (Luke Wilson), Frank (Will Ferrell), and Beanie (Vince Vaughn) are all thirty-something and very disenchanted with their lives. They try to recapture their college days by starting their own off-campus frat house, which doesn't necessarily please the dean.

A Terrier Mix named Moe played the part of Mitch's pet dog, Orson. Two trainers accompanied the dog everyday to the set. In the following scenes the action was achieved by the dog and trainer in the same way.

Orson greets Mitch at the door when he comes home. Later the dog is seen standing in the doorway of the bedroom barking. When Mitch moves into his new house and his buddies come to help him, Orson is in the background lying on the couch. Max comes in with his dad and joins Orson on the couch, petting his head. Towards the end of the film, lots of people are in a motel room watching television, laying on the beds and floor and the dog is lying on the floor too. A trainer placed the dog on its mark and used verbal cues from off camera to get the dog to achieve the action. For that last scene, Max had some treats in his pocket just in case!

As a lady walks a dog by an alley, a van comes out quickly in front of them. The trainer handed the actress the leash and stood off camera. The alley and street were closed off and the van drove out of the alley as the actress and dog approached. Both the dog and actress were well prepped for this scene as well as the actor who drove the van.

Mounted animal heads on the wall in the dean's office and the stuffed fish that hangs on a wall in Mitch's house were not real. They were provided by the prop department.

Max's birthday party takes place at a petting zoo. The animals are in enclosures and the children can pet them. The children are shown petting a llama, then a mini horse. A man is seen pulling a rope attached to the mini horse through the slats of a wooden pen. The mini horse was tied off in a hidden manner so that when the actor tugged on the horse, he was really tugging on a beam that was hidden in the cage. A trainer standing off camera with a bucket of food, verbally cued the horse to look at him and then used the bucket of food to make its head bob up and down. This helped add to the appearance that the horse was being pulled by the rope. The actor was very conscientious to make sure that he didn't spook the horse. All of the animals in this scene were provided by a wrangler, have all been on television or in movies before and were very comfortable with the children's interaction in the scene.