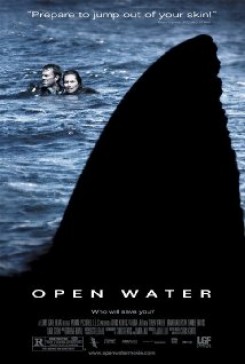 Based on the true story of two scuba divers accidentally stranded in shark infested waters after their tour boat has left.

American Humane's Film & Television Unit did not monitor the independently financed thriller Open Water, filmed in the Bahamas. The Film & Television Unit's work is funded by a grant from the Industry Advancement and Cooperative Fund – administered by trustees of the Screen Actors Guild (SAG) and the Alliance of Motion Picture and Television Producers (AMPTP) – which allocates resources solely to cover SAG domestic projects under the SAG/AMPTP codified agreement.

Productions filming abroad do have the option of contracting for American Humane's monitoring services. However, this does not guarantee that the film will receive American Humane's End Credit Disclaimer, since the Disclaimer is awarded exclusively on the basis of animal treatment during production. The filmmakers of Open Water did not request American Humane's services, and since American Humane was not present to witness the extensive animal action firsthand, the film has been rated "Not Monitored."

Why is American Humane concerned?

Comments to the press made by the filmmakers and actors have raised issues of concern to the American Humane Association. Open Water claims to have not used animatronic or computer-generated sharks.

On May 9, 2004, the Los Angeles Times featured interviews of the film's cast and crew. Commenting on director Chris Kentis and his technique of filming at eye level with his actors, Blanchard Ryan says in this article, "He was crazy with the sharks. They were biting his camera cases, and he would bang [them] on the nose and wrench it out of [their] mouths."

Premiere Magazine online has a piece which mentions similar close encounters, and says that the director sometimes engaged in "tug-of-war matches with the gray sharks, who left bite marks on his camera."

In a press release by Lions Gate Films, Kentis says, "We would throw bait into the water to get the sharks to move. But once too many pieces are in the water, the sharks get really worked up, and then the actors would have to get out of the water."

The end of the film contains images of a shark being carved up with its bloody entrails spilling out. Since the filmmakers claim to have used no special effects or computer-generated imagery in Open Water, American Humane is concerned that a real shark was involved in this scene. American Humane opposes any killing carried out for the purpose of filmed entertainment.

In addition, an important benefit of monitoring animal action is increased safety for humans on-set. The alleged baiting of the animals and creating of a risky situation for both animals and humans are not acceptable practices based on American Humane's standards.