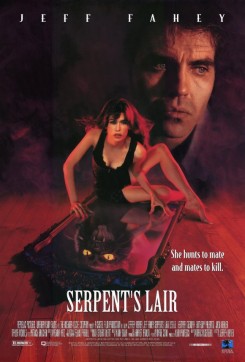 Serpent's Lair is an erotic thriller that fuses together demons, the devil, strange satanic rituals and sex. While they wait for the sale of their new home to go through, Tom and Alex Bennett, a young newlywed couple, rent a quaint little apartment. But little do they know that this will end up being a nightmare for both of them as the apartment becomes a real "Serpent's Lair". Very happy and very much in love, this couple is quite pleased with their rental and are in the process of making it comfortable, when Alex stumbles upon a small den-like room they had not noticed before. She begins going through various items, including numerous books and papers on the supernatural. She tells Tom of her find, and the two of them ask the realtor about these things. They are informed that the previous tenant had committed suicide by cutting off his own penis. He had done this because he felt it was the only way to stop the evil Succubus who was slowly trying to kill him. (A Succubus is a demon which, in alliance with the devil, changes from a cat into a beautiful seductress. By doing this, she is able to have sex with her chosen victim until she has collected and stored all of his semen, later to be used to create demon children, leaving the victim drained of his life.) Tom and Alex hear this elaborate story but dismiss it, believing that the man was simply crazy, thus killing himself. The realtor asks the Bennetts if they wouldn't mind leaving his things in the room for just a few days, as the man's sister had called and requested to come by and pick them up. Although somewhat reluctant, they agree. That next day, Tom comes across a stray black cat and he and Alex agree to adopt her. But it isn't long before everyone realizes who is the cat's favorite. The following day when Alex returns from work, she brings home a new litter box for the kitty. The cat walks to the litter box, sniffs it, and promptly turns and runs to Alex's shoe where it proceeds to defecate. Needless to say, this is not a good start for the relationship. Within a few days, numerous things take place which lead Alex to beg Tom to get rid of the cat--things like the cat jumping up on counters and breaking all of the china and crystal, sleeping on Tom's chest, prohibiting Alex from getting close to him, and leaving little "presents", like dead mice, on Alex's pillow, to say nothing of Alex's unexplainable allergies. Tom really puts up a fight, but finally agrees to find another home for the cat. The next morning Tom leaves for work. Once he is gone, the cat goes into action. Alex is home from work with one of those unexplained allergies. The cat jumps onto the hall table and knocks off one of Alex's favorite glass candleholders. The cat waits until Alex is almost close enough to grab the second one before it topples and she knocks it over, breaking it. The cat then jumps off the table and scoots off down the hall with the irate Alex in hot pursuit. Alex rounds the corner, only to have the cat jump out and scare her, causing Alex to tumble headlong down a flight of stairs. This fall sends Alex to the hospital to recover from her injuries which is exactly what the cat, whom we now realize is Lillith, the Succubus, had in mind. Lillith can now go to work on Tom, her intended victim all along. Once Alex is in the hospital, Lillith changes from the cat into the beautiful seductress. She shows up at the Bennett's apartment that same evening, posing as the sister to pick up her dead brother's possessions. Although she is quite beautiful and persistent, Tom is able to tactfully avoid her advances. Over the course of the next few days, Tom is not so lucky, and finally gives in to his enchantress. Although he is filled with guilt having succumbed to his temptations, he is unable to control himself and is at Lillith's beck and call. Tom is now frightened and knows something is terribly different with this insatiable woman. He is in too deep and must turn to some very drastic measures if he is to survive this evil presence and try to salvage what is left of his marriage.

Animal action is fairly continuous throughout this film. A cat or cats are present in several scenes. For the most part, the cats are used only as atmosphere, lounging, sleeping, sitting, eating, being petted, etc. The scene where the cat defecates on Alex's shoe was shot in cuts. The cat was filmed walking to the shoe, then filmed walking away. Fake rubber feces were placed on the shoe prior to the cat walking away from the shoe. In both instances, the trainer, out of the camera's range, called the cat to come with both verbal commands and the aid of a clicker. Food was given as a reward. In one scene, a mouse is seen running across the kitchen counter and then out of sight. Lillith, the cat, is then seen running after the mouse. This scene was also shot in cuts. The cat and the mouse were never together. The mouse was prepped prior to filming for this scene. He was placed at one end of the counter by one of his handlers and called by a second handler to the other end of the counter with food as a reward. The cat, who followed verbal commands to come, also was rewarded with food. The cat and mouse were not filmed together in the same scene. In the next scene, we see the cat lying on Tom in the bed, purring. On Alex's pillow next to her is the dead mouse. This was a fake mouse with stage blood applied to it. The cat was merely placed on top of the actor and followed verbal commands to stay. All sounds of cats purring, meowing, howling, etc. were added in post production. The scene when Alex falls down the stairs was also filmed in cuts. When the cat knocked over the candleholder, she was placed on the table and coaxed by her trainer, who was off camera, to rub up the candle stick. The cat was called off the table from down the hall by his trainer with food as a reward. The cat was not actually present when the actress fell down the stairs. This film was produced by a foreign production company and filmed in Romania. However, after conferring with the trainers, American Humane is rating Serpent's Lair "Believed Acceptable".