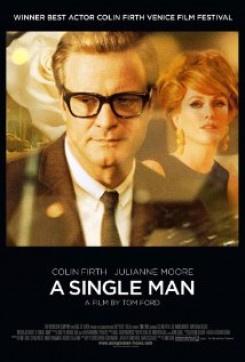 George (Colin Firth) loses his partner suddenly and must try to cope with living his life while grieving.

In one of George's fantasies, his friend Grant (Lee Pace) and Grant's family stand in a bomb shelter with a cow, a chicken and a goat. This scene was filmed in a real bomb shelter. Straw was placed on the ground for comfort and food was scattered on the ground for the chickens. Trainers brought the animals to their marks and then stood just off-camera. The actors were well-rehearsed and instructed on handling the animals properly.

The young girl that lives next door to George shows him a scorpion in a jar. A trainer placed the scorpion into the tightly sealed but well-ventilated jar and handed it to the actress right before cameras rolled. The actress handled the jar carefully as the trainer stood just off-camera.

Jim (Matthew Goode) and George lie on the couch while one dog lies with them and another lies on the floor nearby. As Jim gets up, the dog jumps down from the couch. The dogs knew each other and were placed on their marks before filming began. The trainers stood just off-camera, and one trainer cued the dog to jump off the couch and walk away.

Production provided documentation that the dead dog at the car accident and the stuffed cat that appears on the gun shop counter were props.

Due to limited resources and scheduling conflicts, American Humane did not monitor any of the owl or butterfly action and some of the dog action.