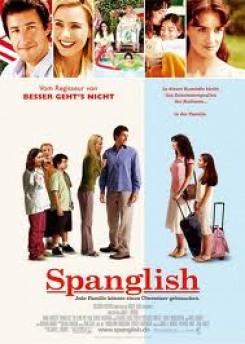 Cultures clash when Flor (Vega), an attractive single mother, struggles to maintain her privacy and control over her precocious daughter Cristina after taking a job as a housekeeper for a wealthy American family.

A yellow Labrador retriever named Ranger played "Chum," the Clasky family's dog. Chum appears throughout the film performing mild action such as walking from point A to B, hanging out with the family, and engaging anyone remotely interested in a game of fetch with his favorite tennis ball.

In one scene, Chum plays fetch with Flor and soon knocks over a set up Monopoly game. For this action, the trainer first held Ranger off camera in a stay position and, for one take, verbally cued the Lab to jump up on Flor and follow her around the table. On the second take, the dog jumped on the table with the board game. As a safety precaution, crew members stabilized the table before filming the action.

To achieve all Ranger's ball-playing action, trainers cued the dog to hold the tennis ball in his mouth and nudge the actors with it. Whenever someone threw the ball on camera, a trainer standing out of frame simultaneously called Ranger.

In one scene, a woman walks a medium-size dog in the Claskys' neighborhood. Trainers instructed the extra how to properly guide the dog and stood out of frame as she performed the action.