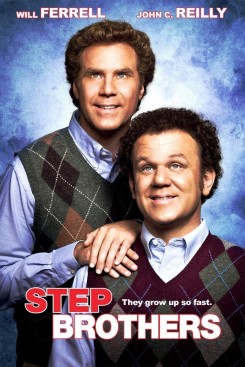 Unemployed losers Brennan (Will Ferrell) and Dale (John C. Reilly), who still live at home, become adult stepbrothers when their respective parents get married. The two initially hate each other, but they soon become best friends when their parents decide to kick them out.

Don, the blind neighbor, is in his yard with his dog, Cinnamon, on a harness while talking to Nancy (Mary Steenburgen) and Brennan (Ferrell), who have just arrived in Nancy's car. Two Belgian shepherds were alternated in the role of Cinnamon. The actors and crew were introduced to the dogs and instructed on their proper handling before filming began. The dog in the scene was accustomed to wearing the comfortable harness and was never near the moving car.

As the two brothers fight inside their house, Cinnamon jumps onto the outside window ledge to peer in. A trainer placed the dog on the ground below the window and then verbally cued the dog to jump up the short distance and to bark and growl. As the brothers continue the fight outside of the house, the dog chases them and grabs onto Brennan's pant leg and pulls on it. Two stuntmen doubled as actors in this scene, which was filmed in separate shots and edited together in post-production. First, the trainer placed the dog on its mark and cued it to run past the stuntman to another trainer nearby. For the close-up of the leg "attack," the trainer placed the dog's favorite tug toy inside the stuntman's pant and showed the dog that it was there right before cameras rolled. The trainer then cued the dog to "get it" and the dog happily obliged.

During the fight, several stray dogs gather in the yard to join in. Nancy sprays a hose to try to control the situation. Several dogs and trainers were used for this scene. All the dogs were introduced to each other and to the area several days before filming began to make sure they were comfortable with each other and the action. Some of the trainers doubled as the actors so they could supervise the action while the cameras rolled. The water pressure of the hose was low so it would not hurt the dogs. The actress was instructed to spray the hose in a certain area and not directly at the animals or humans. Some of the water-loving dogs got wet as part of this playful activity. The grounds were inspected for safety before filming.

The brothers wake up in their front lawn spooning with Cinnamon. The dog stands up and walks away. The actors positioned themselves on the grass and the trainer put the dog on its mark and stood just off-camera using a combination of hand signals and verbal cues to get the dog to stay and then walk out of camera range.

At a playground, several children beat up the brothers. A few birds fly up into the sky as the kids surround the brothers. The birds were homing pigeons and were released right before filming began. They were banded and returned home.

Production provided documentation of their purchase of the stock footage of a dolphin that appears briefly on a television.

American Humane also monitored a scene with a rat and a horse that did not make it into the theatrical release.