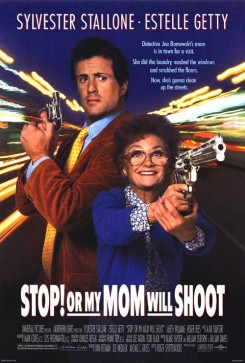 Stop! Or My Mom Will Shoot

Stop! Or My Mom Will Shoot is the comical story of Joe Bomoski, a cop on the Los Angeles police force, and how his everyday life becomes chaotic when his mother comes to visit. Joe's mother, Tutti, is a very sweet little old lady that still thinks of her son as her "Little Joey". Tutti proceeds to interfere in every aspect of Joe's life, including his relationship with his girlfriend, Gwen, who also happens to be Joe's Lieutenant. One day while Tutti is cleaning up Joe's apartment, she decides to clean Joe's gun as well...with Ajax. Joe becomes very upset when he discovers that his revolver is now ruined because of the cleaning. Feeling remorseful about the incident, Tutti sets out on a shopping spree to buy her son a new pistol. She meets up with a sleazy character who convinces her, as she loves a bargain, to purchase the weapon from him and his friend. As she leaves the alley with her purchase, she turns just in time to see a car speed down the alley and kill the men she has just bought the gun from. She goes to the police station to report the murder, but won't give any information to anyone but "her little boy". Now Joe...and his mom, take us through their ridiculous escapades as they try to capture the murderers.

Tutti has a small terrier, Pixie, whom we see as her constant companion throughout the movie. In one scene Joe, Tutti and Pixie are searching a warehouse for the criminals when a demolition ball crashes through the walls. Joe picks up Pixie in his arm, throws his mom over his shoulder and begins to run through the warehouse as the ball continues to crash through the building, just missing them. This scene was shot in cuts. A fake dog was used when the three are trying to escape the ball. The real dog was never in the building during any of the demolition action. Pixie is also seen sitting on the kitchen counter waiting for food, sitting in a travel bag carried by Tutti, riding in Joe's car on Tutti's lap and sleeping on Joe's desk. Other background animal action included ducks swimming in a pond and pigeons flying.