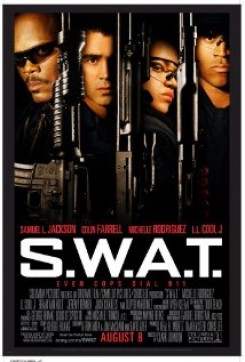 An imprisoned drug kingpin offers a huge cash reward to anyone that can break him out of police custody and only the LAPD's Special Weapons and Tactics team can prevent it.

German Shepherd dogs are shown running, sniffing and growling while standing near the officers. Two other dogs are shown growling and barking as a suspect runs by. Birds fly naturally in one scene.

Detailed Animal Action German Shepherds One policeman, Jim Street (Colin Farrell), has a pet German Shepherd. There is a scene where Jim is running on the beach and his faithful companion is running along side him. The film seems to speed up as the two are running very fast. A trainer put the dog on its mark and stood off camera using a combination of verbal cues and hand signals to get the dog to achieve the action. Later, in post production the film speed was