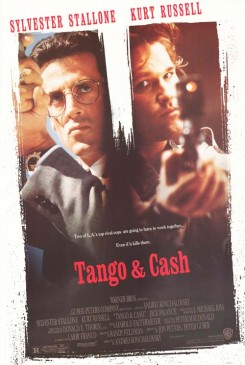 Tango and Cash is an action-packed crime drama about two cops, Ray Tango and Gabriel Cash who are so successful at busting drug smugglers the drug czar decides to put them out of commission. He sets them up for murder in a phony sting operation where a federal agent is killed. They stand trial and are found guilty. As part of a plea bargain, they are to be sent to a minimum security prison, but due to a double-cross find themselves in maximum security amid some of the criminals they'd arrested. After they're severely beaten and nearly electrocuted by some of the inmates, they decide the only way to vindicate themselves is to escape and find who was responsible for setting them up. They make a daring escape through rat infested tunnels while being pursued by murderous inmates and by guards with attack dogs.

In other animal action the drug czar keeps pet rats which he handles with care.