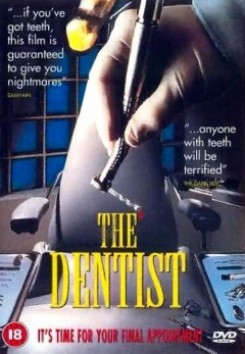 The Dentist is a film about Dr. Alan Finestine, a dentist who is a compulsive neat freak. Alan has the perfect home, wife, and dental practice. So it is no wonder that when he catches Brooke, his wife, making love with Danny, the pool man, he goes crazy. In a state of rage, Alan gets his gun and follows Danny to Paula Roberts, his neighbor's house, with the intention of killing him. Before Alan can make it around the back to where Danny is, Paula comes out of the front door and wants to know what he needs. He makes up some plausible excuse and acts like he is leaving while Paula retreats back into the house. After seeing that she has shut the front door, Alan proceeds to the backyard where he is appalled to find Paula and Danny entering her bedroom from the patio. That evening for their anniversary, Alan has Brooke meet him at the office before going to dinner. Unbeknownst to Brooke, she is about to have major dental surgery on her mouth. After strapping her into the dental chair, Alan proceeds to remove all of her teeth. The next day when Danny arrives at Brook's house he finds her at the pool in a lounge chair. When he removes the hat that is covering her face, he is shocked to see the grotesque evidence of what Alan had done. Unfortunately for Danny, Alan is at that very moment approaching him from behind. He cuts his throat killing him and then proceeds to his office where he goes crazy, killing or maiming his assistants and patients.

When Alan goes to Paula's house and sees Paula and Danny enter her bedroom, it is more than he can stand at that moment. In shock, he slides down the gate to a sitting position. Paula's dog is seen running towards the fence, jumping up at it, and growling. Alan jumps up and kicks at the fence as the dog continues to bark and growl at him. After Alan turns to walk away, the dog makes another lunge at the fence. When Alan had kicked the gate earlier, he had unknowingly knocked the lock loose, so the dog is now able to escape. He runs after Alan, attacking him. The dog grabs his arm and bites at the sleeve, tearing the material. The animal is heard growling as we see Alan point his gun in the dog's direction, followed by the sound of a shot. This scene was shot in cuts. When the dog is seen running towards the fence barking and growling, trainer #1 had released the dog while trainer #2 using a towel that the dog considered "play" cued the dog to bark and growl. When the actor is seen kicking the gate, the dog is not seen in the shot. For the portion of the scene when the dog attacks the doctor, the stunt-double was used. He was prepped with the dog prior to the scene. The trainer released the dog to the stunt-double and the dog was merely playing with the man. When the doctor is supposed to kill the dog, the actor simulates shooting the dog. The dog is not actually seen during that portion of the scene. The sound of the shot was dubbed in in post-production. Later, when the police arrive on the scene, a form is seen on the ground covered by a sheet. The detective pulls back the sheet to reveal what looks to be the head of the dead dog. For this, a taxidermic goat was used. By shooting the shot of the head from a certain camera angle, it appeared to be the head of the dog.