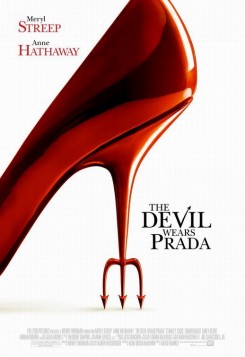 Based on the best-selling novel by Lauren Weisberger, The Devil Wears Prada tells the story of aspiring journalist Andrea Sachs (Anne Hathaway) and her misadventures working as an assistant for Miranda Priestly (Meryl Streep), the dictatorial editor of a major fashion magazine.

While loaded down with shopping bags for Miranda, the multi-tasking Andrea also walks her boss' St. Bernard, Patricia, in one brief shot. Trainers handed the leash to the actress shortly before the cameras rolled, and Hathaway walked the dog across the street, where an awaiting handler collected it on cut.

The albino python seen during a photo shoot in the park was handled only by the snake wrangler, who was in costume for the shot. Production rented the stuffed birds used as accessories from a prop house.