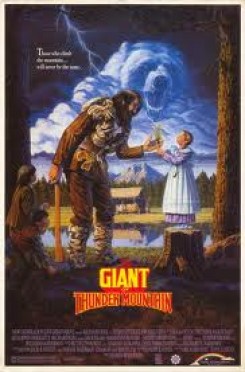 Giant of Thunder Mountain, The

This is a story of a man, Eli, and his parents who live on Thunder Mountain. Eli's parents are savagely attacked and killed by a wild bear, leaving the 8 foot tall somewhat grotesque looking Eli alone. The children of the town below have named Eli The Giant of Thunder Mountain. Three of the children, Ben, Tommy and Amy, overcome their fears and go up the mountain to confront the "giant", only to discover that he is just a gentle and lonely man. The children and Eli soon become good friends. When the carnival comes to town, Amy talks Eli into coming down off his mountain to attend the celebration with her. Once they arrive the townspeople are unusually cruel to Eli, jeering and snickering until Eli retreats back to his mountain, vowing never to leave it again. Against the wishes of her mother, Amy sneaks up to Eli's cabin and makes amends with her friend. One of the carnival men noticed that Eli was carrying two gold nuggets and, with the aid of his brother and father, has decided to "relieve" Eli of his gold. As they go to rob Eli's cabin, they discover Ben, waiting for Eli to return with Amy, and the men kidnap Ben. When the children's mother discovers that the children are missing, she is convinced that Eli has taken them, and the whole town becomes involved in the hunt for the "giant".

The bear in this picture was Bart the Bear, who starred in such pictures as The Bear and White Fang. All shots involving human contact with Bart were done with the trainer, dressed accordingly, "playing" with him. When the bear attacks Eli, Eli, in turn, hits the bear in the head with a log and the log breaks. The log was made of pieces of soft balsa wood with tree shavings glued on the outside to simulate a real log. In another scene Eli's house has been set on fire by a posse on horseback. The horses used in this scene were trained rearing horses. There are other scenes involving very mild animal action, including feeding a deer, raccoon, fox and squirrel, and background animal scenes involving a hawk, owl, chickens, wolf and deer.