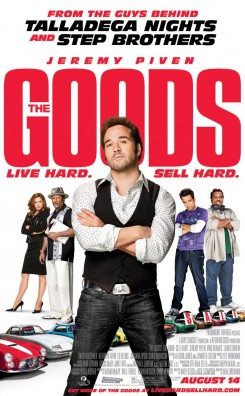 A used car dealership is going under and is forced to hire a sales consultant (Jeremy Piven) to help increase sales. They plan to use a Fourth of July sale to bring up sales, while dealing with rivals who wish to see the dealership go out of business.

Pigeons Two pigeons are on the hood of a car in the sales lot and one of the salesmen tries to shoo them off with his hand. Later pigeons are sitting on the car dealership sign. A trainer stood on a ladder alongside the sign and placed two birds on the sign. A monofilament line was attached to one leg of each bird and held by the off-screen trainer. The action on the hood of the car was achieved in the same way. Dog In one scene, a dog walks in the sales lot amongst the cars and the salesmen. The grounds were checked ahead of time for safety and all cast and crew were instructed on the handling of the dog before filming began. One trainer placed the dog on its mark while another trainer stood off-camera and called to the dog, who walked to him. Alligators As several people enter the sales lot they begin to run to various cars. We also see a couple of alligators walking around the lot. The grounds were checked ahead of time and only necessary cast and crew were allowed on the set. Only stunt people were allowed near the alligators. All actors were kept a safe distance from the alligators in a designated area on one half of the lot. Trainers stood just off-camera near the alligators with catch nets and guide poles to retrieve them when the scene was finished. The night crawler held up by a kid in one scene was a fake rubber prop. American Humane also monitored a shot of an alligator sliding down the hood of a parked car and a scene with a wolf, which were cut from the theatrical release.