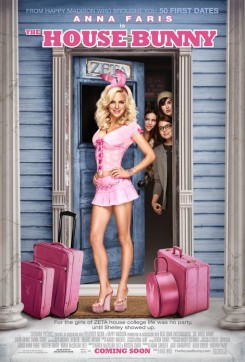 Shelley (Anna Faris), an ex-Playboy bunny, becomes the house mother at the Zeta Alpha Zeta sorority house. When the socially inept sorority girls realize they are about to lose their house, perky Shelley steps in and gives the girls a confidence boost to fit in better on campus.

The girls are sitting in the living room when a pig runs in wearing a Zeta Alpha Zeta T-shirt. One of the girls jumps up, chases the pig, grabs it and pulls the shirt off. Before filming, trainers introduced Monty the pig to the cast and crew and instructed them on how to handle him properly. Only necessary cast and crew were allowed on set for this scene, which was filmed in separate shots. One trainer released the pig while another trainer used a buzzer to get the pig to run across the room. The pig was trained to run up to the screaming actresses, who pretended to be afraid of him. A trainer put the pig on his mark and cued him to stay so that the actress could grab him and pull off the shirt. The T-shirt was attached with Velcro, making it easy to pull off.

Two Maine coon cats named Cosmo and Stubs were on call for the part of Pooter, Shelley's pet cat. The trainer introduced the actors to the cats before filming and instructed them on proper handling. For the mild scenes in which Shelley picks up the cat or lies in bed with it, trainers stood just off-camera.

Shelley and Marvin (Owen Benjamin) are in the driveway by the car as Pooter lies on a nearby bench. Marvin, who is wearing a vest with no shirt underneath, picks up the cat to put him in the car, and the cat grabs onto Marvin's bare chest with his claws and will not let go. The trainer attached a waist tie to the cat's torso, placed him on the bench and stood out of camera range holding the other end of the waist tie. Later, the waist tie was removed so the actor could pick up the cat. The well-rehearsed actor was wearing a fake prop chest smeared with baby food to entice the cat to lick. Trainers placed the cat's front legs on either side of the actor's vest and its back legs on the actor's belt, making the cat appear to be hanging onto his chest. For this shot, the cat wore a waist tie, which an off-screen trainer held.

In a couple of scenes, pigeons fly over the Playboy mansion. Trainers stood on ladders behind the building and released the birds from their crates. They were homing pigeons trained to return home, which they did.

American Humane also monitored a scene with some dogs and a cat, which did not appear in the theatrical release.