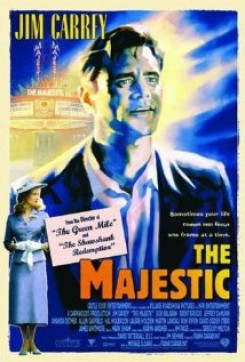 Jim Carrey plays a blacklisted writer from Hollywood who loses his memory in a car accident. He ends up with a new life in a small town, mistaken as a soldier who died in World War II. Martin Landau plays his new father and the owner of the local movie theater, which has been closed since the war. Together, they restore the old theater and re-open it, and in the process come to important realizations.

In one scene, as Pete (Carrey) and another man walk down the back lot of a studio discussing some business, an elephant and a camel are prepped by their trainers in the background. The real trainers doubled as the actors in this scene. The trainers had placed lightweight, comfortable costumes on the animals, which they didn't seem to mind at all.

As Pete drives on a bridge, an opossum runs in front of his car, causing him to swerve and go into the water below. This scene was filmed in front of a green screen, so the car was not present when the animal was on the set. A trainer placed Guido, the opossum, on a mark while another trainer stood on the other side with some food. Guido happily walked across the bridge and received a treat. For another shot, one trainer placed Guido on his mark while a second trainer held a toy above the camera to get him to look into the camera. Lights were shined on Guido to make it appear as if the headlights of the car were shining on the opossum. Later in post production, these shots were edited together and the car was added.

Teddy, a Golden Retriever, licks Pete's face when he is found on the seashore. Some dirt mixed with hair gel was put on the dog to make it look as if it had been running along the shore. For the close up shot of the dog, a trainer put the dog on a carpeted platform that was specially built for the dog. The trainer stood off camera holding a long bait stick with a piece of food on the end to get the dog to look into the camera. Then in another shot, the trainer released the dog and verbally cued it to run to the actor lying on the ground. The dog was eager to lick his face as it was smeared with baby food. For the remainder of the sequence, the dog follows the old man and Pete. The trainer placed the dog on its mark and used hand signals from off screen to get the dog to achieve the action.

Emmett, the ticket taker at the Majestic, holds his adorable Chihuahua mix dog in a few scenes. The dog's real name is Jezebel and she was introduced to the actor before filming began. The two of them hit it off and the scenes came naturally for both. The trainer merely gave the dog to the actor and stood off camera.

No Animal Was Harmed... Not Even The Fly

Inside a producers office in Hollywood, several men are having a meeting. The buzzing of a fly is heard and one of the men looks around for the fly with a swatter in his hand. He walks up to the window and a fly crawls across it. He hits the fly and it falls dead onto the counter. He then pushes the fly carcass into a trash can. For this scene, two trainers accompanied the fly. One placed the fly on the window and stood below it with a tiny straw blowing gently on the fly, a sensation that made the fly crawl. Another trainer stood on a ladder, off camera, above the fly. This trainer also had a tiny straw and blew gently on the fly's front side, which made the fly stop. The actor was filmed slapping an empty glass window with the fly swatter and then in post production they added in the footage of the fly crawling under the swatter. Although a real dead fly was used as the carcass, no live ones were harmed for the scene. The already dead fly was brought in by the trainers (many professional wranglers save insects that die of natural causes so that they can be used when a scene calls for a dead bug, which was how this particular scene was achieved).

Two trainers stood off camera and released homing pigeons from release boxes as a couple share a kiss at the lighthouse. All of the pigeons returned safely.