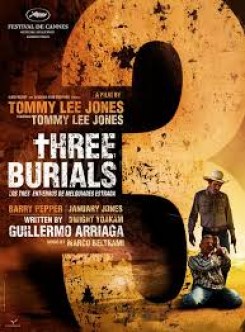 Three Burials of Melquiades Estrada, The

Ranch foreman Pete Perkins (Tommy Lee Jones) is a man who honors his promises—no matter how strange or difficult. In this fictional examination of the U.S.-Mexico border situation, Pete kidnaps a border patrolman and forces him to disinter the body of his friend Melquiades Estrada, whom he swore to bring back to his homeland should he die far from home and family. The unlikely trio then sets off on a dangerous and bizarre journey into Mexico, where oaths are fulfilled and redemption is eventually possible.

During the opening credits, two men in a jeep take aim at a coyote in the desert. After shooting it, the actors are next seen walking up to examine their victim. This action was filmed in several cuts, with the shooting of the coyote implied rather than actually depicted on screen. A stuffed prop was used to represent the dead animal.

In another desert scene, two coyotes and a wolf eat something indistinguishable when two men shoot and kill one of the coyotes. Again, this action sequence was filmed in pieces, and the gunfire consisted of quarter loads to avoid spooking the animals. Each animal wore a short lead attached to a stake in the ground, to keep them near their marks. Trainers buried chicken in the dirt, and the animals dug up the poultry and began eating it.

To make it appear as though the coyote is downed by the bullet, one trainer held a lengthy line attached to the animal while another trainer, hidden in the bushes, held a shorter line attached to the main one. On the director's cue, a third trainer dropped some chicken to entice the coyote to walk in a certain direction. As the coyote approached the food, the second trainer gently tugged on the shorter line, which effectively broke the animal's stride and gave the illusion of it being shot.

Pete picks off ants from the corpse of Melquiades in one scene, and then begins to burn the rest of them off. This sequence used both real and fake ants. An insect wrangler first placed real ants on a fake dummy body, but the real ants were replaced by rubber ones when Pete set fire to the corpse.

Three riders on horseback round up a herd of cattle in one sequence. Choreographing this scene required 100 Black Angus cows and 11 experienced wranglers riding off camera to keep the cattle contained within the area. Riders herded the cattle about a quarter-mile through a hilly area, which the Safety Representative had inspected for debris and hazards before filming began.

Some of those cows also appear in another scene, where they are loaded into pens and then ushered one-by-one into a squeeze chute, which confines the animal for vaccination purposes. Off-screen wranglers helped load the cattle into the pen, and additional trainers in costume used fake cattle prods to guide them along. The syringe used to vaccinate the animals also was fake.

Pete rides across a river and pulls Mike (Barry Pepper) behind his horse with a rope. Our Safety Representative checked the river for debris, depth and swiftness before filming began, and the horse had been well prepped to drag the actor. When Mike and Pete later walk their horses up a hill, Mike inadvertently pulls some hair out when he grabs one of their tails to help himself up. Trainers placed artificial strands of hair in the horse's tail for the actor to grab in this shot.

Throughout much of the film, the body of Melquiades is tied to a mule while Pete and Mike each ride one horse and lead a second one loaded with supplies. Actors were coached on the proper handling of the animals before filming began, and trainers or stuntmen stood in for them whenever possible.

In the first dramatic fall, the mule kicks one of the horses, which rears up and drops off a cliff. This action sequence employed both the live animals and computer-generated imagery (CGI). Trainers positioned both animals near the cliff edge and cued the horse to rear up; a trick camera angle made the animals appear closer to the edge than they really were. The mule kick was added digitally in post production, as was the falling horse. To set up this CGI shot, production threw a garbage can over the cliff and the camera filmed it tumbling down. Special effects wizards in post production then turned that garbage can into a horse.

Later, Pete's horse missteps in the desert, and both animal and rider fall down. After a brief struggle, they manage to get back on their feet. Production used a specially trained falling horse for this action, and a stuntman stepped in for Jones for the shot when it appears the horse is on top of the actor, preventing him from getting up. The clever camera angle disguises the fact that the actor was actually next to the horse—not underneath it.

The snake that attacks Mike was made of rubber; no real snakes were used. Production provided appropriate documentation for all of the dead-animal props that appear in the film.