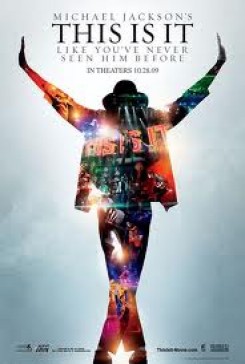 In this documentary featuring interviews, concert rehearsals and special project footage, Michael Jackson prepares for his final concert and is filmed in his final days of life.

During the song Thriller, we see the following animals:

A raven flies through a graveyard. The raven was placed on a prop tombstone in front of a green screen and cued to fly to another trainer who stood off-camera. All the special effects, like the fog, lightning and candles, were added in post-production. In another scene that was monitored but did not make it into the film, a raven sits on a chair by a table with a crystal ball on it and hops onto the crystal ball. A trainer placed the raven on the chair, which was in front of a green screen on an enclosed set, and attached a monofilament line to its leg. Another trainer called the bird to hop onto the ball.

A few rats crawl on a fence, a tombstone and a tree stump in a graveyard as zombies walk around. Trainers placed the rats on the prop tombstone, tree stump and fence on this enclosed set and allowed them to walk at liberty for a brief moment, retrieving them soon after.

A wolf sits howling. A trainer attached a harness to the wolf and then a cable to the harness. A wooden ramp was constructed for the wolf to walk up and sit on, which the trainer cued it to do. The howling sound was added in later. The set was only open to necessary cast and crew. This scene was filmed in front of a green screen.

During the song What About Us?, we see the following animals in the jungle:

A young girl walks through the jungle and birds fly out of trees as she passes. This scene was filmed on an enclosed set with lush vegetation. Four trainers stood amongst the trees with pigeons in release boxes and released the birds one at a time. The trainers had nets to assist in retrieving the birds afterward. Only limited cast and crew were allowed on set.

A young girl walks in the jungle and catches a butterfly on her finger. She holds it for a few seconds and then it flies away. Suddenly more and more butterflies begin flying all around her. Live butterflies were used for the beginning of this scene and then computer-generated butterflies were added at the end of the scene. After putting sugar water on the girl's finger, a trainer removed a butterfly from a special container and placed it on her finger. The inside of the container was at a specific, appropriate temperature for the insects. Trainers released several butterflies from the container and then caught them all after filming. Computer-generated imagery helped make the few butterflies look like several dozen.

A monkey is seen walking in the jungle. A capuchin monkey was equipped with a waist tie controlled by an off-screen trainer. The monkey was placed on its mark and then another trainer cued it to walk toward him.

As the song continues, there are flashes of various animals, including a herd of horses and elephants, polar bears, whales, dolphins and others. These shots were all stock footage purchased by the production.