Since 1877 the historic American Humane has been at the forefront of every major advance in protecting children, pets and farm animals from abuse and neglect. Today we're also leading the way in understanding human-animal interaction and its role in society.  American Humane advocates for the American values of caring, compassion and hope.  Our programs enrich our communities, protect our children, prevent abuse of animals, and embrace the power of the human-animal bond.

American Humane works in association with the American film and TV industry to ensure the well-being of animal actors and promote the human-animal bond. They are on the set to protect animal actors.

American Humanes also celebrates the achievements of extraordinary dogs across the country with its annual American Humane Hero Dog Awards™. In addition, the organization enlists and works with many celebrities who speak on behalf of the voiceless that American Humane aims to protect.

Doing Even More for Animal Actors

When it comes to safety on set, nothing is too good for our favorite animal co-stars on the big and small screen. Over the past two years and right now we’re making major enhancements to further improve on our 99.98% safety record for animals on set. Here are four of them:

It’s all part of a 70-year history of keeping our safe and we’re looking at new ideas and innovations all the time. When it comes to safety, nothing is too good for our animal stars!

Where The Stars Shine Brightest

No Animals Were Harmed® Certification Program 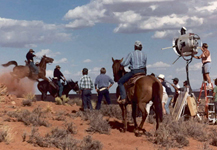 American Humane monitors animals in filmed media and holds the exclusive right to award its "No Animals Were Harmed"® end-credit certification to productions that meet its rigorous standard of care for animal actors. American Humane works with production personnel and trainers in the pre-production planning stage, monitors the animals on set during production, and enforces American Humane's Guidelines for the Safe Use of Animals in Filmed Media. It also investigates allegations of mistreatment and cruelty and sanctions productions that do not meet its standards of humane animal treatment. American Humane currently monitors 70 percent of known animal action in film and television productions. This amounts to approximately 2,000 productions annually, where Certified Animal Safety Representatives™ combine animal welfare and behavioral expertise to care for animal actors and protect their interests.

American Humane's Hero Dog Awards were created to advance society's understanding of the powerful relationship between dogs and people. Each year they conduct a nationwide search to find hero dogs in eight categories: Law Enforcement and Arson Dogs; Service Dogs; Therapy Dogs; Military Dogs; Guide Dogs; Search and Rescue Dogs; Hearing Dogs; and Emerging Hero Dogs. For the inaugural event in November, 2011, eight finalists walked the red carpet and took center stage at a star-studded black tie gala at the famed Beverly Hilton Hotel in Los Angeles, California to accept their category "Hero Dog" award. Selected by popular vote and a celebrity judging panel, one dog is named the overall winning "American Hero Dog." The first American Humane Hero Dog Awards were captured in a live-to-tape production by Emmy® Award winning MRB Productions and aired on Hallmark Channel and Hallmark Movie Channel. The annual event is a unique celebration of heroes at both ends of the leash, dogs and the people who love them. You can learn more about "Ordinary dogs who do extraordinary things" at www.herodogawards.org.