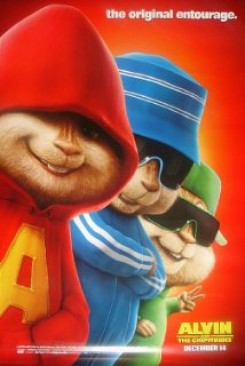 Alvin And The Chipmunks

Based on the 1960s cartoon series, those three loveable talking, singing chipmunks are back. They take up residence with Dave (Jason Lee) after losing their home in the forest. Dave writes songs for the trio to sing and they become famous.

As the end credits roll, we see Ian (David Cross) in his office with three squirrels on his desk, and he stands by them trying to coax them to sing. This scene was filmed in separate shots and edited together afterward. The actor was filmed first, without the squirrels present. Then the squirrels were filmed one by one. A trainer put the first squirrel on its mark on the desk and gave it a nut. The trainer then stood off-camera and held up a bait stick to get the squirrel to look in various directions. The other two squirrels were filmed in the same manner.

In one scene, as Dave relaxes and watches television, he turns to a channel that shows a boa constrictor. The production purchased this footage from the National Geographic channel.

Due to limited resources, American Humane was not able to monitor a scene with a blind man holding a Seeing Eye dog.