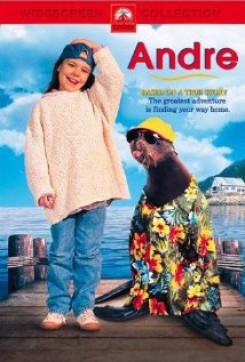 Andre is based on the true-life story of an animal loving family who finds an orphaned seal, cares for it, and trains it. When they run into trouble with the authorities, they are forced to put the seal, Andre, back into the sea. In the end, Andre returns to the family and the friendly harbor in Rockport, Maine and performs his tricks for the people.

The film opens with underwater shots of seals swimming around. You get the idea that they are a family of mammals and the camera follows them as they play, dive and show their grace and agility. These seals were filmed in the wild behaving naturally.

Then we cut to Toni, the youngest of three children, whose father, Harry Goodledge, is the local Harbor Master in Rockport, Maine. Toni is busy having a wedding ceremony for her teddy bear and her pet pigeon who are both dressed up for the occasion. As she then heads to breakfast, we meet the family and realize that they are real animal lovers. Along with her brother Steven, sister Paula, and their mom, the kitchen is filled with life; a chicken perched on a chair, their dog, Toot, under the table, the pigeon in his tuxedo costume, a fish tank, a duck on the counter, a goat at the window and a rat in a cage ready to go to school with Paula as a science project. The animals are simply standing around and Toot even gets a bit of breakfast. Tony goes outside to see her dad who is stroking the pigeon. He tells her to go to school, which she really hates because she is teased by the other girls.

As the Harbor Master, Harry hears lots of complaints, especially from Billy Baker, a fisherman who is having a bad season. Billy believes that it is the seals who are ruining the catch. In an early scene, he is casting out his nets and brings up a seal. He cuts the net to free the seal but is angry that his nets are continually being ruined. For this scene a fake seal was used.

Toni brings an injured frog home from school and nurses it back to health. We never see any injuries on the frog although we see the frog in a shoe box and her father picks it up and strokes it. Later, when Toni brings the frog to school for show and tell, we again see it in the shoe box with a ribbon around its' neck.

On one of his rounds of the harbor Harry sees a seal sticking its head out of the water. In the next scene, we see the baby seal in an old bathtub in the barn being bottle fed by Harry. Since the pup will not eat, Harry takes it to a local vet where we see the pup on the vet's examining table. Later at home, the seal is on a blanket being stroked by Toni who is promising to always take care of him. To solve the problem of the pup not eating, Harry gets a book on mammals and builds an "artificial mother" which the pup takes to immediately and starts nursing. Toni names the seal, Andre, after the man who wrote the book on mammals. There are a series of scenes in which we see Andre being hugged, watching TV and barking at the family dog. Andre even has a first birthday party where all the other family animals are seen in -party hats.

After a year as a house pet, Harry and Toni take Andre to the harbor to get him to swim and be more "seal-like." We see Andre swimming and leaping in the water. In another scene, Andre gets wheeled into school on a wagon for show and tell. Andre hops off the wagon, shakes hands with a student, and barks for the class. Although Toni loves Andre, her dad believes that a seal belongs in the wild and they wheel him, on his cart, down to the harbor. While heading out to the open water on Harry's boat, Andre riding up front on the bow, Harry spots a dead seal in the water, apparently shot. This changes Harry's mind and they head home. As Toni's pet, Andre learns to do many tricks, including dancing to rock and roll. Andre becomes a local celebrity. When we see the dead seal floating in the water, a fake animal was used.

However, not everyone is charmed by Andre. Billy Baker, bitter over a bad season, reports Andre and the Goodledges to the Mammal Protection Authorities. They insist that Andre must be set free. In another scene, Billy, goes after Andre with a pitch fork. Harry stops him and Andre jumps into the bay. Because of this fight, Harry misses his older daughter Paula's pageant, which makes her hate Andre. In an effort to soften her attitude, Toni takes Paula to get to know Andre better, but he only "noses" her in the shins.

Winter comes and Andre can not make it south for the winter. In some scenes we see him swimming in the icy harbor. Harry builds a bigger tub for him, but Andre hates the barn and the authorities are threatening to take him away. He escapes out the barn window and disappears into a snow storm. This scene was shot in cuts. We see Andre in his tub and later we see the broken window above the tub and some blood in the snow outside. Andre is never seen actually going through the window.

Andre returns in spring, but Paula still doesn't like him. She and her boyfriend, Mark, the son of Billy Baker, plan to take Andre out past the harbor and set him free. Unbeknownst to Paula, Mark's real intention is to shoot Andre. Toni sets out to follow them, however a storm is starting to set in and a small craft warning is in effect. As Paula fights Mark for the gun, it goes off, we hear a splash and see the water disturbed. We never see Andre get shot. As the storm kicks up, the fathers finally band together to search for Toni. Her real rescuer actually is Andre, who was not shot after all and pulls Toni's small dingy away from the treacherous rocks toward her father's boat. This scene was shot at a studio in a controlled environment, utilizing a wave tank to simulate the tossing of the waves.

The federal agents are still determined to take Andre to an aquarium. There are shots of Andre in a cage being taken away in a truck and later shots of Andre at the aquarium. He is also seen being lowered in the cage to be set free. Andre lived for many years staying at the aquarium during the winter months and then swimming up the coast to spend his spring and summer with the family in Maine.

We see him doing other mischievous things throughout the film, such as giving people the raspberries, stealing a button off of Toni's new coat, turning off the TV, and barking at people. Some of his other tricks include playing basketball and sleigh riding with the children. There are many scenes of Andre swimming under water and also swimming in the open water, leaping and jumping. There is also a scene where Toni frees a butterfly which she has captured in a large glass jar.