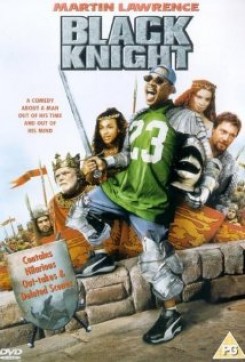 In this time travel comedy, Martin Lawrence plays Jamal, a fast-talking young hustler who works in a medieval-themed miniature golf course who is suddenly transported back to the Middle Ages. There he teams up with a broken-down ex-knight and a beautiful peasant girl to defeat an evil king.

Village People and their Animals

There are several scenes throughout the film where various animals walk with people, run loose, or are contained in pens made by the villagers. These animals varied from goats, chickens, oxen, sheep, geese, cows, and dogs and had several trainers accompanying them. A fence surrounded the set and food was scattered all over the ground to keep the animals content during filming. Most of these animals appear in the background of scenes and trainers doubled as actors to be nearby. All animals that wore any sort of costume were fitted by a trainer for comfort and were acclimated to the costumes prior to filming. When the animals were not on the set, the clothing was removed and all the comforts of home were provided.

Two Friesian Stallions shared the role of Loki, the horse that Jamal is given to ride. An animatronic horse was also made and used during some of the more intense scenes involving this magnificent horse. A memorable scene in the film occurs when Jamal is first given the horse and it rears up and then kicks a man down to the ground. Both horses were stunt horses and were trained to rear up on command. The horse that kicked the man was animatronic. Eventually, Jamal mounts the horse but must struggle to stay up in the saddle as the horse gallops around. Feathers fly when the horse runs into some chickens that fly up in the air. Then, the horse drags Jamal as he desperately clings to the horse's tail. Finally, the tables are turned when the horse chases Jamal. An experienced stunt rider rode the horse throughout most of the scenes, including this one. Several trainers doubled as actors in the background of this scene and two were holding chickens. Extra feathers were added to the chickens so when the horse went galloping by, trainers gently released the full-feathered chickens, and they all landed safely on the ground. The director then yelled "freeze" and everyone stood still so the chickens could be safely caught and taken out of the scene, while the horse continued across the set to an awaiting trainer. In addition, a fake tail was attached to the saddle of the horse to make it look as though the stunt actor was being pulled by the horse. One trainer released the horse, which ran to the other side of the set where another trainer was waiting. The actor ran in front of the horse and exited off camera. Clever editing made it appear as though the horse was actually chasing the actor.

In one scene, a character named Victoria helps remove some leeches from Jamal's neck and back with a hot poker. Both fake and real leeches were used for this scene. The fake leeches were made from fishing lures by the creative folks in the art department. The real leeches were purchased from a store and adopted by one of the crew members who had the knowledge to care for them; he happened to have as a degree in zoology.

In one scene, while Jamal teaches everyone how to dance, a sneaky dog takes advantage of the distracted people by first getting fed table scraps by the King and then helping himself to a big piece of chicken off of a plate on the table. A trainer released the dog and used hand signals to get the dog to achieve the action, which the happy pooch did in one take. The large chicken piece was taken from the dog and cut up by the trainer and then given back to the dog to eat.

Given the film's medieval setting, there were furs and various dead animal parts as well as whole dead animals shown hanging in shops in the villages or being transported by villagers. In the beginning of the film, a dead pig is shown being cooked on a spit over a fire. The production provided documentation for everything that was purchased and used as a prop; no animals were harmed for the film.

Numerous safety meetings were held before filming the carefully choreographed battle sequences. All weapons were props made of lightweight materials and were kept clear of horses.

A crew member stood on a ladder and threw the arrows at the actors to control the action and ensure that the animals were not in any danger. Experienced stunt riders and trainers rode in scenes whenever possible. As two men atop horses sword fight, one horse and rider fall down to the ground. A professional trainer rode the horse and a pit was dug and filled with soft earth for the horse to lie down in. After editing, the horse and rider appear to fall down during the sword fight.

A stuntwoman doubles for Victoria as she picks up Jamal in a carriage and drives out of the castle as the portcullis begins to drop. Crew members were operating the portcullis from off camera and could view it in case the timing was off. Trainers stood nearby to retrieve the horse and carriage once off camera. Soon, a flaming arrow is shot and ignites an awning and some other small fires break out. The arrow was on a wire and maneuvered by a crew member. The flames were put out with extinguishers and water hoses immediately afterwards and were never near the animals.

A trainer doubled as Sir Knolte and a stuntman as Jamal for the scene where Knolte rides by and pulls Jamal onto the horse with him. They gallop off. On the closer shots of the actors riding, a trainer guided the horse using its reins from below camera frame.

Jamal ends up in a coliseum in Rome and three lions are released and begin to chase him. Twelve trainers were on set for the lions, whose names were Czar, Taboo, and Wazoo. A hot fence surrounded the set to keep the lions enclosed. The cages were dressed with Roman columns and each lion was released and filmed one at a time. The whole scene was shot in front of a green screen, meaning that the actors and background were shot separately. One trainer opened the cage while another stood off camera holding up toys and a bait stick. The lion ran across the set to the awaiting trainer who retrieved the lion and rewarded it with a treat. However, only one of the lions was used in the final print. The editor, perhaps partial to one particular lion, tripled the animal's footage to make it appear as if there were three lions in the shot.