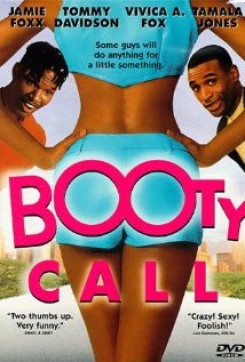 Booty Call is a comedy that focuses on Rushon, his girlfriend Nikki, his best friend Bunz and Nikki's neighbor, Lysterine. Rushon and Bunz want to "get lucky" with Nikki and Lysterine, but the girls want to have "safe sex." The guys night is ruined after many embarrassing trips to the convenient store for safe sex items and while they are shopping, the store gets robbed. If that wasn't enough to ruin his night, Rushon gets shot and almost gets neutered in the hospital after a patient switches charts with him. After their crazy night, Rushon and Nikki finally consummate their relationship.

Nikki has a smooth-coated Jack Russell Terrier, Killa, and he is seen throughout the film. In one scene he is seen attached to Rushon's pants leg. He is also seen under the table licking Lysterine's toes and then licking and nibbling Bunz's rear-end. Later, a show on the television is of Rhino's mating. This was stock footage from National Geographic. Killa gets excited and starts simulating humping the actors leg. For this scene, the trainer placed the dog on his mark and used verbal commands, "take it and shake it up." In one scene, Killa gets hold of Rushon's condom and runs around the room with it. After finally catching him, Killa growls and won't let go. Rushon pulls the condom up and the dog is lifted off the floor. Rushon manages to get it away from the dog and Killa jumps and tries to get the condom again. For this scene, the trainer placed a condom on a clear plastic tube and the dog merely grabbed the tube and played tug of war with the actor. As Rushon opens a bottle of wine, the cork pops off and supposedly hits the dog in the nose. This scene was shot in cuts and the cork did not really hit the dog. Rushon goes to take the dog, who is wearing a doggy sweater and leash, for a walk. As they are walking, Killa sees a cat and barks, the cat runs off. The cat responded to a hand clap which startled him and he jumped and ran off. The hissing sound was added in post-production. The dog and cat were friends and the chase scene was play between the animals. Rushon and Bunz go into the convenient store and tie Killa to the newspaper rack outside. When they exit the store, they see Killa's leash is off, Killa sees them and takes off running down the alley. They chase him until they lose sight of him. The production company sectioned off a real street and experienced drivers were used for stunt driving. These scenes were shot in cuts and the dog was not in danger of being hit by a car. When Rushon gets back to Nikki's apartment, Killa is sitting by the door. He picks him up and carries him into the apartment then sets him down on the floor. The dog is seen standing on a sofa and barking. Other animal action consists of a dog seen wrapped in saran wrap up to his neck and some fish seen in the background, swimming in a tank.