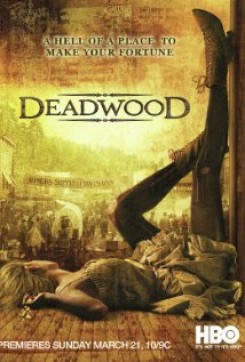 Nestled in the Black Hills of modern day South Dakota, the illegal, lawless settlement of Deadwood attracted all manner of unscrupulous men and women looking to strike it rich during the last American gold rush in 1876. This new series by HBO attempts to show an unvarnished, decidedly darker side of the much mythologized American West, where life centered on corruption, prostitution, drugs, gambling, and rotgut whisky. Historical celebrities Wild Bill Hickok and Calamity Jane ride into town in the pilot episode, and Deadwood's population also includes other real-life characters, such as saloon owner Al Swearengen, the show's number-one villain, and Seth Bullock, a hardware purveyor who would later become the town's first sheriff. A polar opposite of whitewashed television classics such as "Bonanza" and "Gunsmoke", "Deadwood" looks back unflinchingly at how the West was really won.

This new series features an abundance of the typical background animal action one would expect to see in a Western. The equine was the mode of transport de jour, and teams of oxen also appear frequently, either pulling loaded wagons or hitched in stationary positions. Livestock such as chickens, pigs and cows are staples of the mining town set, and prop animal carcasses further enhance the gritty atmosphere.

Men on horseback sometimes gallop at high speeds through the town or in the background, and whenever possible, wranglers doubled as actors and stayed just off camera during filming. All of the actors were instructed on the proper handling and riding of the horses. Rearing and falling stunts were tightly controlled and used only with animals that had been trained to achieve this action on cue. In order to muffle the noise of the gunfire, all weapons were loaded with quarter loads of gunpowder.

Any scenes with fire, either from hand-held torches or burning landscapes or structures, were carefully choreographed to ensure that the flames never came in close contact with the animals. Wranglers carefully checked all paths that the horses traveled to make sure they were clear of any debris that might cause the animals to loose their footing. Dead animal carcasses — which litter myriad scenes — and the mounted hunting trophies hanging on the saloon walls were all props for which production provided documentation. The murdered men that get devoured by pigs in various episodes were not harmed either. Production enticed the pigs to ravish the "victims" by smearing food all over human-shaped dummies. All safety precautions were in place, as well as several trainers and a veterinarian.