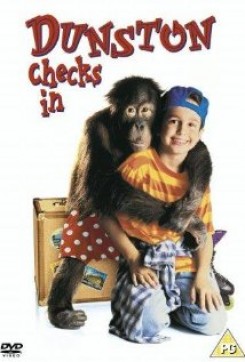 Dunston Checks In is a comedy about an orangutan, Dunston, who is forced by his owner, Mr. Rutledge, to be a cat burglar and a little boy named Kyle, who saves him from a life of crime. Seven year old Kyle and his fourteen year old brother Brian live at the Majestic Hotel with their father, Robert Grant, the hotel general manager. Kyle and Brian devise games and practical jokes to amuse themselves, but unfortunately for their father, the amusement sometimes causes chaos for his hotel guests. Life at the hotel really becomes chaotic when Mr. Rutledge checks in with Dunston who starts entering the suites to steal the guests' valuables. After Dunston's first heist, Mr. Rutledge is mean to the orangutan causing him to run away. Dunston and Kyle become friends and after seeing the way that Rutledge mistreats Dunston, Kyle decides to hide him until he can convince his dad of the orangutan's existence. However, it is not going to be easy because at every turn Mr. Rutledge is close on their heels. It is not until Robert sees Dunston in the flesh and observes Rutledge's mistreatment of the orangutan, that he is convinced of the sincerity of Kyle's story and agrees to help. Robert even jeopardizes his job by helping the orangutan to escape Rutledge during the hotels most important event, the Society Ball. What is suppose to be an evening of style and elegance for the elite, becomes one of mayhem as Dunston goes from looking up ladies dresses to jumping off a chandelier as he dodges the clutches of his owner.