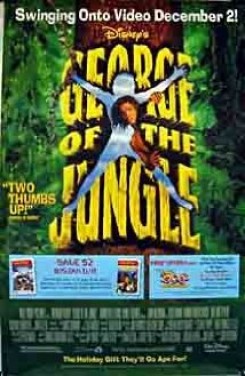 George of the Jungle

George Of The Jungle is a film about Ursela, a young American woman on safari in Africa, who is rescued from a man eating lion by a jungle man. Later, Ursela finds out that her hero is known as "George of the Jungle" and she falls madly in love with him. The only problem is that she is already engaged to another man.

When Ursela and her fiancee encounter the lion, George enters the scene and wrestles it. He is seen supposedly hoisting the lion above his head and then body slamming it. George bounces off of a tree and elbows the lion in the chest. He then flips the lion over and grabs its hind leg in a vice grip and picks it up by the scruff of the neck, tossing it into the jungle. This scene was shot in several cuts. A real and a fake lion were used. For all of the wrestling scenes, the trainer, dressed as a stunt-double, was used and he and the lion just played a familiar game. When the lion is seen receiving body slams, being picked up and tossed etc., a fake lion was substituted for the real one. There is a Toucan seen throughout the film performing various behavioral tricks. A real and a Puppet Tookie bird was used. When the real Toucan is used the trainer placed him on his mark and used verbal and hand commands to cue him. Shep, an elephant, is seen in many scenes in the film where it is performing basic pre-trained behavioral tricks. However, where Shep is "dog-like" a computer generated image has been created. For the animal stampede scene, the various animals were filmed separately in front of a blue screen running from A to B. The trainers released the animals from a cage at point A, while another trainer cued them with verbal and hand commands to point B where a second cage waited. Whenever Apes are seen in the film, they are actually actors in an Ape costume. All major animal actors have a puppet double.