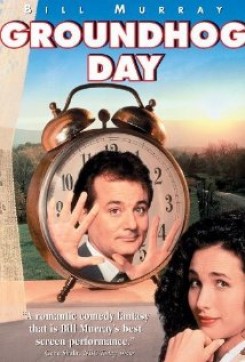 This romantic comedy takes place on one day in the life of a T.V. weatherman, Groundhog Day. Phil Connors is a wise-cracking, egocentric, chauvinistic weather forecaster for a Pittsburgh television station. He has ambitions for a much larger career and is irritated when he's assigned to cover Groundhog Day festivities in Punxsutawney, home of Punxsutawney Phil, a groundhog with forecasting fame of his own. The one aspect that makes this assignment more palatable for Phil is that he will be accompanied by his new producer, Rita, a ravishing brunette. The intelligent and sensitive Rita, however, has no taste for the brash weatherman. Phil awakens before dawn in his quaint bed and breakfast lodging and walks to the Punxsutawney town square where crowds are assembling for the event. As Punxsutawney Phil makes his appearance, Phil makes his on camera report in a bored, sarcastic manner. Then Phil, Rita and their cameraman head back for Pittsburgh, but before they can travel far they are turned back due to a snow storm and poor driving conditions. Reluctantly, Phil returns to his bed and breakfast inn for another night. When he awakens the next morning, to his dismay he discovers that it is not the next morning, but Groundhog Day again. He goes through the same routine as the prior morning with everyone and everything repeating exactly, except for his own actions. This routine continues for days and nothing he does alters it. So Phil decides to use the circumstances and make them more tolerable. He learns from Rita what her ideal man is like and on subsequent days he practices and perfects his act to get her to fall for him. At first she responds, but always in the end, he fails. He is frustrated with his rut and tries to kill himself and the groundhog by driving over a cliff, but nothing changes. Finally he decides to truly perfect himself and change circumstances for the better and a metamorphosis occurs.

Punxsutawney Phil appears in several scenes. A total of seven groundhogs were used so they could be continuously switched and therefore avoid tiring or stressing any one animal. A stuffed groundhog was also substituted for a real one whenever filming would permit. In one scene a town official reaches into a fake tree stump and pulls out a groundhog and holds him up. The animal trainer played the part of the town official. The groundhog was placed on his mark in a sitting position. The trainer reached into the fake tree stump and held up the groundhog. As an added protection, mesh fencing was placed around the groundhog area to keep the groundhog from running into the crowd. When Phil is suicidal and driving the pick-up truck recklessly, a groundhog is on his lap between him and the steering wheel. At times it appears as if the groundhog is steering. For this scene, a trainer was on the floor of the truck feeding the groundhog bananas to keep him on the steering wheel. The groundhog is next shown seated on the passenger side looking up at Phil. To accomplish this, a banana was dangled from a string to hold the animal's interest. When the truck goes over the cliff, a fake groundhog was substituted for the real one. Animal action was monitored by the American Humane Association with on set supervision by the Anti-Cruelty Society of Chicago.