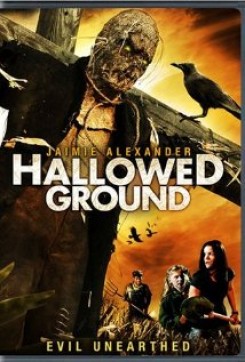 After she becomes stranded in a small town, a young woman discovers her arrival there was foretold a century earlier by the town's founding preacher and that she is an integral part of his impending - and terrifying - rebirth.

Crow Crows are on a branch in front of a house as Sarah (Hudson Leick) and Liz (Alexander) walk through the front yard. A crow flies onto the roof of the house. Later when the girls are in a cornfield, some crows are on branches nearby. Two African pied crows, Buzzy and Piper, were used in these scenes. Each one wore a light monofilament line attached to its leg and held by an off-screen trainer. The lines enabled the trainers to have better control over the birds. One trainer released a bird, which flew to a nearby branch. (Similar techniques were used for the shot in which the crow flies to the roof of the house.) Once the bird was on the branch, corn stalks were placed in front of the branch to make it appear as if the bird was in a cornfield. Production provided documentation that dead birds were fake. The bird attacks at the end of the film and the birds in flight were computer-generated.