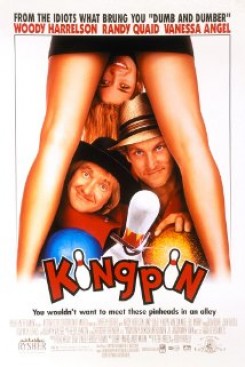 Kingpin is a film about Roy Munson, a champion bowler who once had a promising career. In 1979 Roy won the Iowa state championship for amateur bowlers. After winning the tournament, he toured the tournament circuit where he met Dave Ozio, a pro-bowler and con man. Dave realized that money could be made with this kid. Therefore, he convinced Roy that he could make some easy money bowling if he followed Dave's instructions. Unfortunately, at their first and last con job, the men they conned did the unexpected and came after them. Dave left Roy there to face the angry mob himself and the results were disastrous. As punishment for conning them, the men put Roy's bowling hand into the ball return hole, cutting his hand off.

Sixteen years later, Roy is a conman who sells bowling supplies to area bowling alleys. He has a prosthetic arm with a hook and a plastic hand attached to the end. One day while Roy is working, he sees a guy bowling at the local alley and is very impressed. Later he finds out that the guys name is Ishmael and he is Amish. Roy is convinced that Ishmal could be a pro-bowler and win the million dollar national bowlers tournament coming up in Nevada. He is so determined that he goes out to the Amish community and posses as a member from out of town. Roy finally convinces Ishmal to go to the tournament after informing him that he could win enough money to pay off the land debt the Amish community owes to the bank.

While on the road, Roy teaches Ishmal the art of the con game, but it is when they meet Claudia, another con, that they really start to make some money. When they get to Nevada for the tournament, Ishmal gets into a fight and injures his bowling hand. At the same time, they find out that Claudia has disappeared with all their money. Ishmal convinces Roy to enter the tournament in his place. Roy makes it to the final game but his opponent is Dave Ozio. Dave wins the tournament and when Roy turns to the crowd looking for Ishmal, he is gone. Roy later finds out that Ishmal's brother had shown up during the last game and had taken him back home.

After the tournament, Roy is offered $500,000 to make personal appearances for a company who makes bowling products. Claudia also returns and tells Roy that she loves him. The couple are reunited. Later they drive out to the Amish community and present Ishmal with the check to pay off the land debt.

In one scene, while at the Amish community, Roy is asked to remove the shoes from a very tall horse. When he comes out of the barn he is carrying what is supposed to be the horse's hooves. You never see Roy in the horse's stall. Later the horse is shown in a large stall and he looks to be much shorter.

In another scene, Ishmal's dog is seen grabbing the fingers of Roy's fake hand and growling. For this scene, the trainer placed a gaff (a device similar to a retainer that pushes the animals' lip up, simulating a snarl) on the dog's mouth. A plastic tie connected the rubber hand and the gaff, so as the hand is pulled away from the dog, the gaff is simultaneously pulled, giving the illusion that the dog is snarling.

There is also scene where Roy and Claudia are looking for Ishmal and they stop at a gas station. The station is also a reptile farm. When they approach the building, the attendant is holding a snake. As the man talks to Roy and Claudia he bites the side of the snakes head. A fake snake was used for this segment.

Other animal action consists of a few scenes where horses are seen hitched to carriages as they are driven down the road by Amish people. Ishmal's brother is also seen sitting at a toll booth with his horse and buggy. When Roy is at the Amish community, farm animals such as chickens and horses are seen in the background and in the barn. In the last scene a ladybug is seen crawling on Roy's hand and then it flies away. The horses were actually the property of the Amish people. The other livestock was the property of the owners of the farm where the scenes were shot.