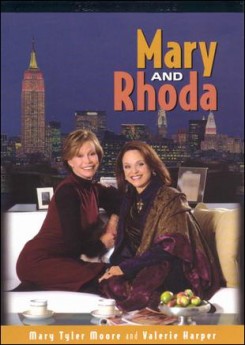 The story concerns the reuniting of long-time friends Mary and Rhoda after many years of estrangement. Mary's politician husband had died in a rock-climbing accident and the grieving Mary had been living in Italy for four months after his death, and had just returned to New York. In a meeting with her lawyer upon her return, Mary finds out that she has no income…her husband had spent all of their savings on his political campaigns, and she realizes she must find a job as soon as possible.

Rhoda, too, was back in New York, having left her French husband in Paris.

Unsuccessful in their attempts to contact each other. they accidentally meet and ulltimately decide to live together. After a series of brief, humorous stints as a dog walker, telemarketer, etc. she finds employment as a journalist at a television station, work she had done in the past. At the station she encounters ageism as well as a struggle to maintain her high journalistic standards in the formullaic world of television.

Rhoda gets a job as a photographer's assistant, hoping it will lead to photographic shows of her own.

The story is about the four women, Mary, Rhoda and their two daughters, all of whom are trying to find themselves. Mary's daughter, for example, leaves college to pursue stand-up comedy.

Many incidents occur with the two women which are both funny and poignant.

Later on in the story, a stray dog is seen crossing the street in traffic and Mary runs after the animal trying to keep it from being hit by a car. The animal eludes her until she trips and lands on the sidewalk. It then returns to her side and licks her face. This was accomplished by applying baby food to Mary's cheek and prepping the dog to lick the food.

When Mary decides to adopt the dog, she carries it to her car and puts it inside. The dog is prepped by the trainer to bark when Mary and Rhoda attempt to get into the car.

Once inside the apartment, Mary has decided to show the dog she is the boss and stop its barking. The trainer has prepped the dog to lie on its side after Mary talks to it, then she bends down and pets it while it rolls over.

Once this tender moment has passed, we see the dog appearing to urinate on the couch. This action is created by the trainer slipping his hand under the dog and lifting its right leg towards the couch to create the impression that the dog is urinating. The scene is shot so that the trainer is outside the frame.

The final animal action takes place at the end of the film when the dog is shown tearing into one of Mary's pillows. The dog has been prepped to get the pillow and chew it.