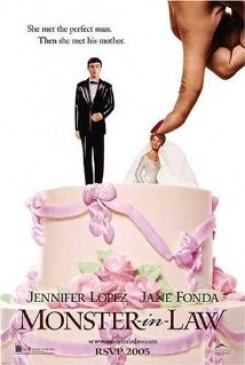 Jennifer Lopez stars as Charlotte "Charlie" Cantilini, a young woman elated to have finally found Mr. Right—that is, until she meets her future mother-in-law. Viola Fields (Jane Fonda) thinks no woman is good enough for her doctor son Kevin (Michael Vartan), especially not a dog walker/receptionist/caterer like Charlie. When Viola and her long-suffering assistant Ruby (Wanda Sykes) decide to sabotage their engagement, Charlie must decide whether the relationship is worth such a down-and-dirty fight.

In several scenes, Charlie walks a group of dogs on the beach. For better control, the dogs' leads were attached in groups of three to a clip Lopez held in each hand. Trainers situated the dogs on the special leash, instructed the actress on the handling of the dogs, and passed the clips to her right before the cameras rolled. The handlers walked alongside Lopez and the dogs just out of frame during the scene.

In another scene, Charlie sits on the beach with four of her canine clients when one of the dogs tries to mount another. An off-screen trainer verbally cued this action and the actress adlibbed the newspaper swat she gave the amorous pooches. In another scene, as Charlie and her canine cohorts approach Kevin, one of the dogs grabs him by the pant leg. The trainer stepped in for Vartan in this shot and verbally cued the dog to "get" his leg.

Later, a Doberman Pincher greets Viola at the door and chases her into the living room, barking and growling all the way. This action was filmed in pieces edited together in post production. First, a trainer held the Doberman by the collar and released it when Fonda opened the door. A second trainer hidden behind the actress used a combination of hand signals and verbal commands to get the dog to run to the door. In another shot, one trainer released the dog while a second used hand signals to get the dog to bark, growl, and follow the actress.

As a reward for the stunt with Viola, Charlie feeds the Doberman from a spoon as they walk together. Trainers coated the spoon with a special dog treat and waited off camera to retrieve the dog.

Charlie's charges wreak havoc with the furnishings in Viola's bedroom during one hilarious scene. Production artfully messed up the room ahead of time, and each trainer placed his or her dog on its mark and cued it to perform a specific action. Trainers hid food in various objects around the room to make it appear as if the animals were tearing up the place. To encourage the dog to chew on a cushion, trainers placed some food in a jar and put the jar inside the ripped open pillow. The trainer placed feathers on the dog and around the room before filming began.

In one shot, a big dog pulls the strap of an open suitcase that has a smaller dog inside it. A trainer set Tyler, the small dog, in the open suitcase, and the bigger dog, Bob, was cued by a handler waiting at the end mark to pull the suitcase.