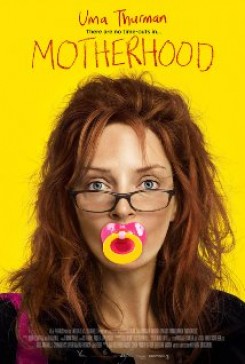 A frazzled mother of two balances her unpredictable husband, her special-needs dog, her humble New York apartment with stressful parking arrangements, and her two children, all while trying to keep her self-esteem and her writing career intact.

Throughout the film, Eliza's (Uma Thurman) family has a pet sheltie, who is seen performing such mild action as being held or petted, walking from one point to another, and sitting or lying. For all of these scenes, trainers used hand signals and verbal commands to cue the mild action, which the trained dog was accustomed to performing. The leashed dog walking on the sidewalk in the background of one scene was handed to the actor moments before filming and retrieved right after.

The neighbor's cat also performed such mild action as sitting, standing in a hallway, being petted and lying on a bed. This action was also achieved using trainers' cues and hand signals. The cat and dog were introduced to each other before filming and were familiar with each other.

For scenes in which the dog is in the car, trainers placed the animal on its mark on the car's front seat and cued it to stay. Trainers stood just off-camera or hid in the car, which was driven slowly by the well-rehearsed actress.