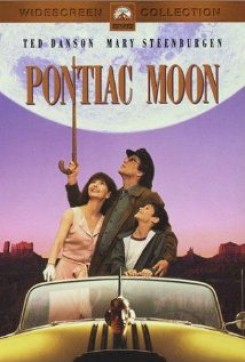 Pontiac Moon is the story of a young boy, Andy Bellamy, who is fascinated with the stars and the planets, especially the moon. The year is 1969 and the Apollo 11 is about to be launched carrying man to the moon. Andy's father is a science professor, Washington Irving Bellamy. His mother, Katherine, is an agoraphobic who has not been out of the house in seven years. This year is going to prove to be historic for Andy in more ways than one. Washington Bellamy collects vintage cars. His favorite is the "Chief", his 1949 Pontiac convertible, named for the medallion on the hood of the car. He loves cars because he believes you can depend on them, "unlike women." Katherine refuses to let him drive the cars and will not let Andy even sit in one. Washington is a man of letters with a poetic spirit who hates that his son is so confined by his mother's phobia. Not only will she not go outside, but she will not allow any of Andy's friends into the house. Washington tries to encourage her to just step outside, but it is useless in the face of her fear. Katherine told Andy that on nights when the moon is full, you can hear the music of the spheres. Andy is fascinated by this thought and actively tries to hear the celestial sound. He also is devoted to his pet snake, Buzz, named after the astronaught, Buzz Aldron. He is seen throughout the movie wearing Buzz around his neck as a way of carrying him. He also carries him wrapped around his hand. Washington realizes that the Apollo will travel 238,857 miles from earth to the moon. He has also discovered that his Pontiac is only 1,700 miles away from having that exact number of miles on it's engine. This fact becomes the propellant for Washington and Andy to set off on a great adventure. Washington has calculated that if he and Andy drive the Chief to the Spires of the Moon National Park, the only meteoric site on earth, they will, in the same time the Apollo takes to travel to the Moon, have clocked the same mileage on the Chief. They will also reach the "moon" in the same time that the Apollo will. This exciting historic event is also his opportunity to get Andy away from the house and into the world. Washington, Andy and Buzz set out in the Chief on the morning of the Apollo launch and cross the desert towards the National Park. However, on the way they pick up a Native American Viet Nam war veteran named Earnest, who becomes fond of Andy. Since Washington walks with a limp, attributed to a war wound, there is an instant bond between the men as well. They all stop at a sheep farm owned by one of Washington's oldest friends. It is through both photographs at this friends ranch and through his overhearing a conversation between the men that Andy discovers the real reason for his dad's limp and his mother's fears. It is because of a car accident in which his mother was driving. The three of them stop at a bar/motel/gas station/restaurant. Here Washington, Earnest and Andy, who carries Buzz in his jacket, take a break from the road. Washington and Earnest have a few beers and Andy watches as his dad even sings in an amateur night contest. When a woman flirts with Washington, Andy sends Buzz, who has poked his head out of the jacket, down the bar to scare her off. As Buzz slithers down the bar he eventually ends up slithering over Washington's arm. The woman screams causing people in the bar to become incensed. Washington picks Buzz up and the three back out of the bar. Once Andy's mother discovers that the Pontiac is gone, she gathers her courage to find her son. She actually gets dressed up, steps out of the house and even drives off in one of Washington's most unusual little cars. Washington, Andy and Buzz make it to the Spires of the Moon where they crash the Pontiac into a crater just as the mileage turns to 238,857 and the Apollo touches down on the moon. Katherine surprises everyone, especially herself, as she arrives just behind them, reuniting the family. Andy finally does hear the music of the spheres as the planets change direction in the sky above him.

Animal action was simple in this film. Buzz, the snake, is seen throughout the film either in his glass aquarium, being carried by Andy either around his neck or his hand and riding in the car wrapped around the rear view mirror. For theses scenes, a trainer was always present and placed the snake prior to shooting. The trainer also worked with the boy off the set so that the boy was comfortable with the snake and aware of handling precautions. In scenes where the snake was seen wrapped around the rear view mirror of the car, the trainer was in the car, lying on the floor just off camera. In the few scenes where the car needed to pull away with the snake wrapped around the mirror, the trainer, while not in the car, remained just out of camera range. The car moved very slowly and traveled only a short distance. For scenes where the car is seen speeding along the highway and for the crash into the crater, a fake snake was used. In another scene the snake was shown in close-up with Washington as he lectures a class of science students. On one side of the screen is the snake flipping its tongue in and out. On the opposite side of the screen is Washington in profile imitating the snake by flipping his tongue in and out simultaneously. For this close-up, the trainer actually was holding the snake off camera while the actor mimicked the snake's behavior. When the actor is seen holding the snake and placing it in the aquarium, the actor was prepared by the trainer and was comfortable holding the snake. The scene in the bar was shot in cuts. The trainer placed the snake in the boy's jacket and the actor held the snake as he walked to the bar. The bar had a heated surface. The trainer placed the snake onto the bar and it moved toward it's box which was just off camera. For the shot where Buzz crawls over Washington's arm, the trainer placed the snake on the actor's arm. The scene at the sheep ranch where there is a large herd of sheep around the ranch house was shot on location at a sheep farm. The sheep were on their own home turf and were merely standing in the background as atmosphere. In one scene the sheep rancher held a small lamb in his arms. For this, the baby lamb was merely placed by the prop person into the arms of the actor.