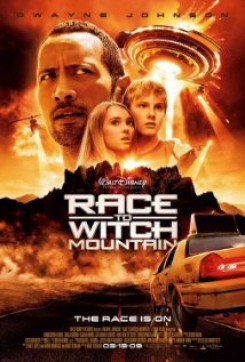 Jack Bruno (Dwayne Johnson), a cab driver with a checkered past, picks up two mysterious kids. He soon realizes he's involved in something major when the kids turn out to be the key to saving the planet and they must head to Witch Mountain to find a spaceship while avoiding the government agents who are out to get them.

The kids and Jack (Dwayne Johnson) befriend a junkyard dog, which is seen in various scenes in the film. While filming with the dog, streets were closed off to traffic. All grounds and fences were inspected for safety. Cast and crew members were introduced to the dog and instructed on its proper handling before filming. Whenever the dog is seen performing such mild action as sitting or lying in a vehicle near actors, being held, or being walked on a leash, trainers placed the dog on its mark and stood off-camera, using hand signals and verbal commands to cue its actions, which the trained dog was accustomed to. Barking and growling was also a cued behavior.

When the dog initially runs up to Jack and then begins licking Sara (AnnaSophia Robb) on the face while whining, trainers cued the dog to bark or growl and to approach the actor near the camera. Trainers then called the dog to jump up onto the child actor and lick her. The dog then lunges at the bad guy and bites his arm. For this brief scene, the dog's main trainer doubled as the bad guy and was equipped with a special protective "bite sleeve." The costumed trainer cued the well-rehearsed dog to "get" his arm and play tug of war with his sleeve. While the dog shook the trainer's arm back and forth, the trainer dropped the non-working prop gun he was holding, making it appear as if the dog viciously attacked him.

After the dog jumps into the backseat of the taxi, men fire guns at the cab, causing Jack to quickly speed off. The gunfire was a sound effect added in post-production. For any shot in which the dog is seen getting into a vehicle, off-screen trainers cued the dog to go from point A to point B. The dog was extremely well-rehearsed to jump the short distance from the ground into the taxi, and the actors were extremely well-rehearsed to wait until the dog was safely inside the taxi and its tail was clear of the door before closing the door. In certain scenes, the taxi was perched on a special filming trailer (in order to serve as a moving camera platform), and the dog was especially well-rehearsed to jump the slightly added height from the ground into the taxi (these trailers are very low to the ground). The trailer was then driven a short distance with the dog focused on the trainer standing outside the taxi window. In certain scenes, the taxi was not on the trailer and thereby free to drive off as a standard vehicle. In these scenes, the trainer hid inside the car to hold and cue the dog, and the car door was equipped with a remote feature, so that crew members could safely open and close the door and maintain full control while the car sped away. This was safer than the actors closing the door while the car drove away.