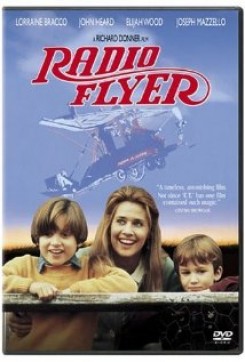 The bittersweet memories of childhood, when anything was possible if you could just imagine it and wish hard enough, form the basis for this endearing and thought provoking melodrama that is sure to tug on your heart strings. It's the story of two young brothers, Bobby and Mikey, and their dog Shane, as told from the point of view of the adult Mike who recalls the secret abilities and fascinations embraced by children and lost by adults. After the breakup of her marriage, their mom packs up the boys, Shane, and their meager belongings into their dilapidated station wagon and heads west to relatives in California. Being very poor they sustain the cross country trip on little more than peanut butter, a sense of adventure and love for each other. After awhile their Mom meets and falls in love with Jack, the man of her dreams, who prefers to be called "The King". They marry and the new family move into a modest home in a small northern California town. Their idyllic existence is short-lived as The King has a drinking problem and a sadistic streak which he vents by beating the younger and more vulnerable brother, Bobby. The boys, loathe to spoil their mother's happiness, keep the beatings a secret. They continue to endure their sadistic step-father with only their devotion to each other, the love of their mom and their protective dog to see them through. One day Mikey devises a brilliant plan for Bobby to escape the torments of The King. They will turn their little red wagon, the Radio Flyer, into a flying machine which Bobby can pilot to the sanctuary of far off lands and adventures. Children of all ages will enjoy this beautiful and heart-breaking story. The ending becomes total fantasy however, and adults are advised to suspend all logic and just accept it on a child's level.

American Humane commends the producer, the director and the trainers of Radio Flyer for the exceptional care and concern for the total well being of all the animal actors in this production. Much more animal action was filmed than actually made it into the finished film. On their cross country trip the family visits a roadside museum where a lone buffalo is on view. When the boys imagine how lonely the buffalo must be, a close up shot of the buffalo's head fills the screen and tears run down his face. This was accomplished by a make-up artist applying harmless glycerin to the buffalo's face. The simple A to B moves of the Buffalo were accomplished with the lure of an Oreo cookie for which this buffalo is particularly fond. Off the set he was supplied with all the hay, Arrowhead bottled water and Oreo's he wanted. When the buffalo appears to Mikey one night in a dream, a larger than life mechanical buffalo was used. There is a shed in the backyard of their new home where the boys discover a large turtle with a chain clamped to it's shell. The chain was not really clamped, but was attached with double faced tape which was easily removed and harmless. When the boys first see the turtle, Shane dashes into the shed with it and you are led to believe there is a scuffle, but there was no real confrontation between dog and turtle. The turtle is present in many scenes with the boys and was usually just placed in position then allowed to do whatever he wanted. At times a fake turtle would double for the real one. While out playing one day the boys explore a large drainage pipe that is filled with frogs. The frogs were placed in position and then allowed to do what they wanted with the actors taking care where they stepped. Neighborhood bullies confront the boys while they are walking through a wooded area, but Shane comes to the boys rescue, jumping from a rock and chasing the bullies away. The dog had been trained to jump and camera angles made the rock appear higher than its three foot height. Later, the same bullies try to break into the boys backyard clubhouse while Shane is inside the house. Shane barks a warning to the bullies then jumps through a screened-in window chasing the boys out of the yard and tearing the seat out of the pants of a boy fleeing over the backyard fence. This scene was shot in cuts. The dog responded to his trainer's verbal commands to speak as he barks running from window to window. He had been trained to jump through the screen which was not wire, but nylon mesh which had been treated to tear easily. The camera then filmed the dog jumping off a three foot padded platform. When the dog is seen chasing the boys, he is actually running towards his trainer who is on the other side of the fence. The boy whose pants were ripped was actually a stunt person and the dog had been trained to go after a breakaway patch on the rear of his pants. Shane attacks The King to stop him from beating Bobby and gives him severe arm bites. The dog had been trained with a fake arm which he had been encouraged to go after as part of a game. For filming, special-effects men placed the fake arm on a stunt man, showed the dog the arm and encouraged him to "Get it, get it". Stage make-up simulated bite marks and blood. A similar scene occurs later, but this time The King has a chain to use as a weapon against Shane. Very little of the actual fight is seen, but when the boys return home from school they find a badly injured Shane lying in a pool of blood alongside their clubhouse. He is lying half on, half off a platform built for this scene. The boys cry and run to their beloved Shane and start petting him. For this scene the dog was placed in position with fake blood on him and the vicinity. The trainers told the dog to stay and the scene was filmed as the trainer kept repeating "Stay". When the dog rallies he walks with a limp. This was achieved by wrapping a bandage around the dog which restricted his movement so that he could not fully extend his leg. The boys' special "Wishing Spot" is a rocky promontory that appears to jut out dangerously high above the valley. The actual filming area was not a cliff, but a rock about 10 feet high with the ground gently sloping downhill below it. A similar rock was constructed on stage for filming reverse shots. Other animals seen briefly, primarily as atmosphere, are a cat and birds. Although there is a fishing scene, no fish are actually there and the bait is a fake lure. American Humane was present during both training and filming of animal scenes and was assisted on the Northern California locations by The Marin Humane Society and the Tuolumne County Humane Society