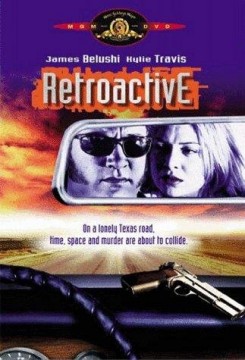 Retroactive is a film about Karen, a police psychologist, who is stranded in the desert after she accidentally crashes her car into a sign. She accepts a ride from Frank and Rayanne, a couple passing through the desert. When they stop for gas, Frank is informed by the owner, who is also a friend, that his wife has been having an affair. Frank returns to the car and he and the women continue driving. As Frank angrily discusses the affair with Rayanne, he pulls out a gun, kills her and then also tries to shoot Karen. Karen, however, escapes by hiding in a secret government lab. While she is there, she accidentally discovers an experiment that retroactively sends her twenty minutes back in time. She does this several times and on each occasion, while trying to save Rayanne's life, she only makes things worse and more people get killed. Finally she goes back one last time, sixty minutes ahead, and is driving her own car and avoids hitting the sign which changes the outcome of her experience.

A rat is seen walking in a maze and into a trap. He is supposedly killed by the trap, but this is not shown. After the rat is retroactively sent back in time, he is once again seen in the maze. However, this time when he gets to the trap, he deliberately avoids it.