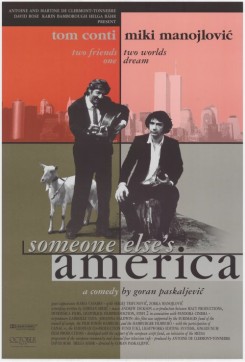 Someone Else's America is a film about Bayo, an illegal alien who lives in New York. Bayo works for his friend Alonso cleaning his bar. He shares a room above the bar, with his pet rooster. Bayo is saving money to send for his three children and mother, back in the mountains of Montenegro. Bayo does not know that his young daughter, Savka, is ill and the doctor informed the family that the only cure is for her to see her father. His mother, realizing she has only one chance to save her granddaughter, gathers the family together, Savka and her two brothers, Luka and Pepo, and migrate to America. While sneaking across the border from Mexico, Pepo, Bayo's youngest son, is swept away by the current as they cross the Rio Grande. After getting the rest of the family across the border, Luka, Bayo's oldest son, contacts his father to let him know that they are in America. When Bayo and Alonso reach the family, Luka tells his father what happened to Pepo. Bayo goes back to the border and tries to locate anyone that might have information about Pepo, while Alonso takes the rest of the family to New York. After reaching Brooklyn, Luka immediately adapts to life in the U.S. After failing in his attempts to find his younger son, Bayo, terribly depressed, returns to Brooklyn. In the meantime, Luka, determined to stay in this country, learns as much about the people and his surroundings as he can. He soon meets the Asian girl next door and shortly thereafter they are married, securing his stay in America. In light of Bayo's depressed state, his mother and daughter decide to move with Luka and his new bride to San Francisco. After Bayo's family moves away, Alonso helps him to look towards the future and to put the tragedy of his young sons death behind him.

The rooster is seen throughout the film. There is one scene, where Luka is seen chasing the rooster as he tries to catch him. He is then seen walking down the street and later on the beach with the rooster in his arms. Luka is later seen under the pier holding the rooster as he watches a cockfight. Bayo in the meantime, has been following Luka and after making his presence known he smacks Luka across the face. Luka lets go of the rooster and it lands on the beach. The roosters in the cockfight scene were not fighting roosters but actual pets of the trainer. The two birds were play-mates and were not prone to fight amongst themselves. To accomplish the scene, the trainer tossed the roosters in the air to simulate the act of the roosters going for each other. Feathers were also tossed in the air to simulate the actual fighting. In another scene, Bayo, made at Alonso, decides to take his rooster and find other lodgings. Bayo walks down the street holding the rooster as Alonso drives his truck beside them, trying to convince Bayo to come back. The rooster is also seen in one scene pecking at Bayo's feet and in another at Luka's feet, in an attempt to wake them up. Bayo is also seen holding the rooster on the back porch during the wedding and later sitting the rooster on a table at the reception. Other animal action consists of a bird seen flying overhead as Bayo searches for Pepo. Bayo goes through various villages on his quest to find Pepo and while he is there farm animals can be seen in the background. Also in one village a small boy is seen carrying a puppy by his hind legs up-side down. A goat is seen several times tied to a makeshift well and inside a makeshift pen outside the men's New York apartment. Alonso's mother is seen feeding him hay. Bayo's daughter and Alonso is seen handling a baby chick. Someone Else's America was a European Production. American Humane was represented on the set by the New York SPCA for the cockfight scene which was filmed in New York. The remainder of the animal action was shot in Europe. Due to the scene of the boy carrying a puppy upside down by his hind legs, we are rating Someone Else's America "Questionable."