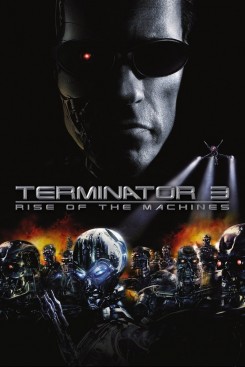 Terminator 3: Rise of the Machines

John Connor (Nick Stahl) is living in the streets as a hacker. Now a new terminator, the T-X (Kristanna Loken), who has power over all machines, has been sent back to not only kill him, but has been programmed to eliminate other Cybernetic organisms. A new T 101 unit (Arnold Schwarzenegger) is also sent to help John.

John Conner is riding a motorcycle at great speed and passes a deer standing on the side of the street. As he comes around a curve, he falls off the motorcycle and the deer wanders back into the woods. This scene was filmed in cuts and edited together in post production. The road was closed off to any through traffic. A trainer placed the deer on its mark in the street and a stuntman doubled as the actor and rode the motorcycle at half speed behind the animal as the trainer stood just off camera. The actor then laid down on the ground and tipped over the motorcycle to make it appear as if he had lost control of the bike.

Katherine is called to her animal clinic early one morning to receive an ill cat named Hercules. A woman enters the clinic carrying a pet carrier with an unseen cat inside. After Katherine discovers John Conner has broken into her clinic, she confronts him and locks him in a cage where other animals are also being housed in cages. It is a dark scene and hard to see what animals are in the nearby cages. Later when John kicks open the cage and escapes, if you look very closely you can see Hercules the cat in the background. As Katherine runs out of the building she finds T-X and T-101 fighting each other.

Molly, the cat played the part of Hercules. Molly was placed inside her own cat carrier, so she was very familiar with it. The actress carried it to the door and through the clinic into an examining room. Although it is difficult to see in the film, Molly is really inside and in character during the entire scene! All of the animals were carefully placed in cages by the trainers. The trainers placed towels and newspapers on the bottom of the cages, some of which had clipboards hanging on the outside of them. The dogs were placed inside by the trainers and allowed to act naturally. All of the animals were prepped beforehand with the noise of the 1/4 loads that went off during the gun battle. Stuffies of each animal were made and placed in the cages whenever possible.

As the camera takes us over some fields and to the birthplace of Arnold Schwarzenegger's Terminator character, a large snake is seen slithering in the grass. The snake was a computer generated image.