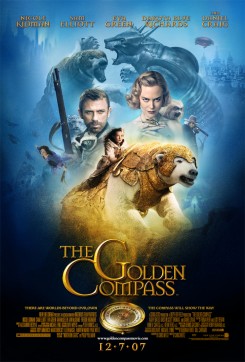 Lyra (Dakota Blue Richards) is a young girl surrounded by brilliant scholars. But when this adventure-seeking child is given a magic compass, she embarks on a journey to find the fantastical Arctic dust that brings unearthly worlds together, along with talking animals, armed polar bears and frightened children forced into dangerous experiments.

A group of huskies appears to pull a sledge through the snow. This scene was filmed in separate shots against a green screen. Trainers placed several huskies on a platform. The dogs were attached to a sledge harness and ropes, which were held by a trainer. The trainer then cued the dogs to "pull," and walked forward with the dogs. The sledge was added in later.

Anytime that Mrs. Coulter's (Nicole Kidman) hired help is seen standing with dogs, trainers verbally cued the dogs to "heel" at the actors' feet. The dogs and actors were introduced to each other before filming began, and the actors carried treats to entice the dogs. When dogs are seen alongside nurses, the nurses were costumed trainers who cued the dogs to perform mild actions. All children were instructed to not touch or feed the dogs. In one scene, orderlies catch Lyra (Richards) hiding under a table, and one dog sits near a medical cart while another looks and barks at Lyra. For this scene, trainers used verbal commands and hand signals to cue the dogs to move in certain directions or bark. The barking dog was equipped with a waist tie held by the trainer to keep it from running out of camera frame. The actress used treats to entice the dog. Inside the Bolvangar Station, a few adults are seen with dogs by their sides. For this mild action, trainers cued the dogs to sit and stay.

While Lyra walks through an outdoor corridor, a cat follows her. A cat named Sally was used for this scene. Trainers used verbal cues and "bait sticks" to get the cat to look and walk in various directions. The set was fenced in and trainers stood nearby as a precaution. Cast and crew were instructed on the proper handling of the cat and were told to be quiet. Trainers immediately retrieved the cat after filming and sent her home in her carrier.

Most of the polar bear scenes were computer-generated imagery (CGI). However, a live polar bear was used for a few establishing shots of the animal. Certain actions were filmed against a blue screen, such as walking, sitting, standing, jumping, playing with a bucket and swimming. These actions were filmed inside a caged area. No personnel except for two trainers were allowed inside the cage, and three additional trainers were stationed just outside the cage. While standing at a respectful distance from the polar bear, trainers tapped certain areas of the set with a bamboo cane (occasionally baited with food) to get the bear to walk to those areas. Trainers then rewarded it with treats. The polar bear only performed mild actions that it was accustomed to.

For scenes involving ferrets, ravens, hares, cats, chameleons, sparrows and capuchin monkeys, each animal was briefly filmed for a frame of reference, and then re-created with CGI. The live animals were brought in and filmed against a green screen one at a time to create reference shots for the computer to use as visual effects. The animals were cued to perform the mild action, such as standing or sitting, and were never around cast and crew, only trainers.

For numerous other animals in the film, no real animal was ever used, and the entire animal and all of its movements were created using CGI effects. These animals include birds, butterflies, ermines, horses, lemurs, leopards, lynxes, mice, ocelots, owls, mantises, rats, snakes, wart hogs, wildcats, wolfhounds, wolves and certain breeds of dog.