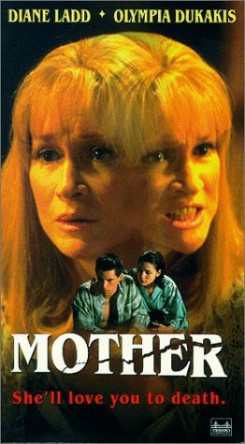 A present day thriller, The Haunted Heart is the name of a card shop in New York, owned and operated by Olivia Hendrix, a deranged psychopath. She is obsessed with keeping Tom, her nineteen year old son, under her roof and dependent upon her. She will kill anyone who threatens to jeopardize that.

The movie opens in a cemetery where a man in his early to mid forties is standing next to the grave of Thomas Wilson. While he stands there, a woman dressed in black puts flowers on Thomas Wilson's grave. The man inquires the reason for the flowers, since he is fairly certain that the woman did not know the deceased. He learns that someone had contacted her by mail with cash for the flowers to be placed on the grave.

In a flashback we see Tommy Wilson, a little boy dressed as a cowboy with a toy gun. He is alone in the room watching television while his mother is in the other room with his father who is holding Tommy's new little brother, Benjamin. While watching television, he sees a "real cowboy" jump into a window and shoot down at the bad guys, so Tommy does the same. As he stands in the window of their second story apartment, his mother spots him and runs to grab him. Startled by his mother coming at him, Tommy falls to his death. Olivia never recovers from Tommy's death. She starts calling Benjamin Tommy. One day while his father is at work, Olivia packs Tommy's and her clothes and leaves. When Tommy gets older, she tells him that his father committed suicide.

As he gets older, Tommy begins to realize just how overbearing his mother is. At one point while he is out, Olivia finds a marijuana cigarette in his room. To punish him she takes his keys to his truck and grounds him. That same evening, while his mother is out, Tom takes the spare key and goes to pick up his girlfriend, Audrey. When his mother returns and finds Tom is not home, she calls Audrey's mother and learns they are at a club dancing. Olivia goes to the club and tells Tom to come home as they have to open the store early in the morning. When Tom refuses to leave, Olivia goes home and fakes an attempted suicide by taking an overdose of vitamins.

While she is in the hospital, Olivia's psychiatrist, Dr. Chase lets her know that he is aware that she faked the overdose. He releases her a couple of days later and makes Olivia promise to come to therapy two to three times a week. Because she keeps canceling appointments, Dr. Chase pays her a visit letting her know that he has learned that Tom's father not only did not commit suicide, but is still alive. Olivia becomes irrational and while at the top of the stairs, she pushes Dr. Chase down to the bottom, then drags him to the top of the basement stairs and throws him down that flight also. Amazingly, Dr. Chase is still alive so Olivia uses an ax to finish the job.

When Olivia was in the hospital, Tom had Audrey spend the night with him at home. Nosy neighbor, Natalie Jay, observes all of this, and because she wants a sexual encounter with Tom, tells Olivia about his and Audrey's tryst. Having previously warned Audrey to stay away from her son, Olivia and Natalie plot the demise of Audrey. To accomplish this, Natalie calls Tom at Audrey's apartment and tells him how sick Olivia is. After Tom leaves for home, Olivia heads over to Audrey's apartment with a gun. She demands that Audrey get into water-filled bathtub. Audrey tries to explain to her that Natalie wants an affair with Tom, but by this point, Oliva is completely ballistic and throws a radio into the tub, electrocuting Audrey.

When Tom arrives home and realizes his mother is not there, he instinctively knows he must get back to Audrey's apartment as quickly as possible, but it is too late. Knowing that his mother murdered his beloved Audrey, Tom becomes hysterical. Olivia is now at home completely insane, so when Natalie walks in, Olivia slashes her with a knife.

Throughout the film, a mysterious man is seen inquiring about Tom and his mother. He is outside Audrey's building as Tom comes running out. He follows Tom to Olivia's building, but Tom is in such a rage, he does not notice the man following him.

We learn that he is Tom's father. Olivia responds to Ben as if he had just gone to the store minutes before. Her mind is completely gone. Ben, who is now a police officer, handcuffs Olivia. Tom has just about lost his mind as well. He takes his mother's gun, tells his mother he loves her and kills her.

Animal action is minimal. In one of the beginning scenes, a kitten drinks milk from a saucer. In the scene where Olivia is in the basement with the dying Dr. Chase, the cat sits in the window sill and watches Olivia murder the doctor. We see the same cat watching and meowing as Olivia drags Dr. Chase's limp body across the floor. In one scene, Olivia pours tea for a guest of Tom's. When she spills hot water in the woman's lap, the woman reacts by jumping up and running off, supposedly stepping on the cat's tail. The cat yelps and runs off. This scene was shot in cuts. In reality, the cat's tail was never stepped on. The trainer, off camera, used a beeper to get the cat to run to him. Sound effects of the cat's scream were dubbed in later.