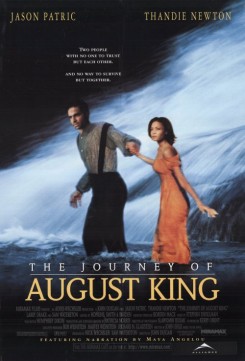 Journey of August King, The

The Journey Of August King is about a young widower who stops in a small town to buy supplies and make the final payment on his farmland. On his way into town he sees a young black girl running through the woods. When he gets to town he finds everyone in an uproar because two slaves have escaped from Olaf Singletary, the richest man in the territory. Olaf has offered a reward for the capture of the two slaves, with the understanding that no one touches the girl. August purchases a cow, ducks, and a pig and then starts making his way home again. That night he sets up camp and finds out he is not alone, as the slave girl, Annalees, appears out of the darkness. She is cold, starving, and her feet are bleeding from running in the woods without shoes. August knows it is against the law to help runaways, but he can not turn her away in this condition. He tells Annalees that she can stay for the night, but must be gone in the morning. When he awakens, Annalees is still there as she can barely walk. Therefore he lets her ride in his wagon, hiding under blankets and supplies. Annalees does her best to hide when others come along. At one time Olaf stops to talk to August and Annalees is right under his nose in the wagon. Some people begin talking about how rude August is to them as he passes them on the road. He is usually very solicitous to fellow travelers. His actions raise some suspicion. August gets worried when a rumor starts that the man aiding the slave girl is trailing a milk cow, tied to the back of his wagon. He decides that the only way to get them off of his trail is to get rid of the cow. August next comes to the river and as he is getting ready to cross, everyone tries to stop him, telling him it is too high and the rapids too rough. However, August knows that he must get home quickly before Olaf catches up with them, so he rushes through the rapids, losing his pig in the process. This is just a few of the many sacrifices August must make on their journey towards his farm. By the time they reach his land, August has lost all of his supplies and livestock, but he doesn't feel bitterness or remorse for his lost material possessions. Instead he feels a great sense of moral gratification for risking everything he valued to help another human being. All that is left to do now is to send Annalees on the road North to freedom and hope that Olaf gives up the search.

When August is on his way into town there is a commotion involving a bear and trappers with their dogs. The bear climbs up a tree and the dogs approach, barking at it. The bear swipes his large paw at one of the dogs and injures the animal. He then comes down out of the tree and runs off into the thick woods. The dog is badly injured and cannot be saved. The owner has to shoot the animal. The bear is actually a man in a bear suit and he is playing with the dogs simulating that they are fighting with the bear. When the dog looks as if the bear has swiped his face, the actor in the suit, swipes his hand at the same time the trainer calls the dog to walk away. Therefore it looks as if the dog has been injured and runs off. The shot of the dog being put down was shot in cuts. The trainer used verbal commands to cue the dog to ly down and stay. The dog is shown on the ground then a shot of the owner with a gun in his hand pointed at the animal. Then the camera cuts away and we hear the sound of a shot gun being fired. There is a scene where August throws some cornbread onto the road to attract the dog's attention away from the girl in the woods. The dogs are snarling and acting like they are going to fight with one another. These particular dogs are trained not to fight one another. Each dog went to an area where food had been placed on their mark. There were no particular commands used to prompt the dogs to snarl or bark as they were naturally protecting the food they were eating. In another scene August puts his pig into the wagon with his geese to protect it from the hunting dogs in the area. The pig and geese are friends so there was no problem putting them together in the wagon. When August gets rid of his milking cow he takes it down to the river bank. He is seen kneeling beside the animal and blood is running into the water. The cows back is to the camera and all we see is the blood on the bank and in the water along with a knife in August hand. The actual scene of the killing is never shown. August decides to cross the fast moving stream and looses his pig in the process. As he crosses the pig is shown struggling in the water and whining. The scene was filmed in cuts using both a real and plastic pig. The real pig is seen walking into the water which was around six inches deep. A plastic pig was used for the rest of the shots. The sounds of the pig whining was later dubbed in in post-production. When August is almost home, he has to pass a small town and the geese start to honk loudly which makes several dogs start barking. The only thing August can do is get rid of the geese for the time being. He takes them off of the cart and sets them beside a tree, intending to come back to retrieve them. In this scene the actor merely picked up the crate containing the geese and sat it on the ground. When August is passing through another village on his way home and he passes a bobcat in a cage with dogs surrounding the area barking. So as not to frighten the bobcat, it was filmed alone. The dogs were filmed later. There are many scenes of towns people riding horses or pulling carts with livestock attached to the backs of the carts. There is also a scene where sheep are crossing the road. In many scenes dogs are seen running through the woods looking for the slaves.