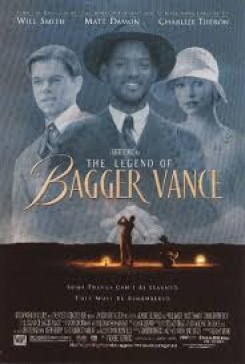 Legend of Bagger Vance, The

Based on Steven Pressfield's mystical novel, this drama stars Matt Damon as a World War I hero who challenges two pro golfers in a local tournament. He gets help from his caddie, played by Will Smith.

There are several scenes on the golf course where dogs are shown in the background with the audience watching the tournament. The owners of the dogs doubled as actors, and a trainer and a veterinarian were present at all times.

In two separate scenes, an alligator is shown bobbing its head in the water. The alligator was supplied by a reptile zoo in Florida and was accompanied by two trainers. The trainers brought the gator to the lake where the scene was filmed and gently lowered the animal into the water. They attached a lead line around the alligator's neck so it couldn't swim too far out. One trainer stood on the shore holding the line while the other one was in the water near the gator, nudging it. The gator responded by bobbing its head.

A trainer supplied the horse and carriage that was shown on the street in the beginning of the film.