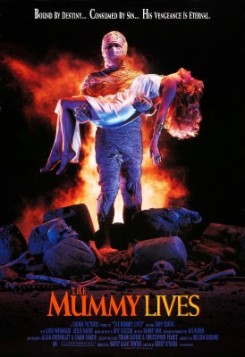 Tony Curtis stars as the mummy in The Mummy Lives, in which he is returned from the dead when his tomb is opened. He reeks havoc and devostation in his quest to reunite with his lost love, who is now in the form of a living woman.

Camels and donkeys are seen throughout in this film either being riden, pulling carts, in the background or as atmosphere. Horses are also seen in one scene being riden by a man and a woman. As the pair ride along they come across a rattlesnake ready to strike. One of the horses spooks and rears up, throwing his rider. Snakes are also seen in several other scenes, mostly as atmosphere in the tombs. In one scene a large snake is seen slithering up a post which holds a parrot's cage. The snake crawls onto the cage and tries to get in. The parrot squaks his objection and then the film cuts away as the squaking stops and feathers fly to the ground. The snake is then shown slithering away. In another scene, a cat is handed from one man to another. When the man reaches to take the cat, the cat reaches up with his paws and supposedly scratches the man's eyes out. Doves and goats are also seen as atmosphere and background.