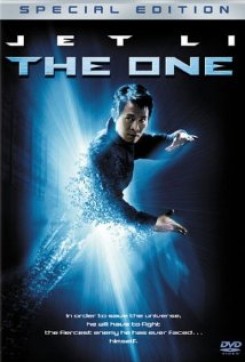 In this parallel universe-themed thriller, Gabe (Jet Li) must defy space and time (and logic!) in order to defeat his enemies - which, in a bizarre twist, include himself.

In one scene, the back of a woman's heel opens up and a rat scampers out. As the rat walks through the room, it appears that something is sticking out of its tail. That "something" turns out to be an antenna that detonates a bomb. Actually, the high heel was specially built by the props department, which also created a hole in the floor underneath the shoe where the trainer stood holding the rat. On the director's cue, the shoe opened up and the trainer released the rat - which had a lightweight antenna attached to the base of its tail. Baby food was smeared on the ground in a trail for the rat to follow. A fake rat was used as the bomb when it exploded.

The part of Ali, Gabe's pet dog, was played by Amber, a Pit Bull mix. At one point, it runs downstairs to greet Gabe. As they head upstairs, the actor stops to pet the dog. The trainer put the dog on its mark and stood off-camera using hand signals to cue the dog to achieve the action.

During a backyard scene, Ali barks at some cops who are on the other side of the fence, looking for Gabe. The trainer put Amber on her mark while another trainer stood on the other side of the fence using hand signals to get the dog to bark and growl. Some gunfire is exchanged and Gabe is shot in the background. It is implied that the dog is shot. The dog is briefly shown lying in the yard with some blood on it. The trainer put the dog on her mark and stood off-camera. Per AHA Guidelines, the guns were fired with quarter loads to decrease the volume and percussion of the gunfire. Adding to the drama was the fake blood applied to the dog and the use of high-speed film to ensure that the audience could not see the dog breathing.

At the end of the film, Gabe rescues Ali after it has been hit by a car. The dog hops on three paws and Gabe picks it up and brings it into the veterinarian's office. Other customers with their pets in traveling cages wait in the background as Gabe rushes into the office carrying the dog. For this scene, one car was present and it remained stationary. The trainer put the dog on her mark in the street in front of the stationary car. Then the trainer gently tied one of Amber's paws with monofilament line so it appeared as though the dog was limping. There were many rehearsals, ensuring that the dog was comfortable with this scene. The trainers also provided and supervised the animals that appeared in the background at the vet's office.

As the cops search the garage for Gabe, a cat jumps over a box and runs out. Later, the same cat runs across the yard. The cat's name is Red and was accompanied by two trainers. One trainer set the cat on its mark while the other trainer stood off-camera with a buzzer and the cat followed the sound.

As Gabe runs from the two men who are chasing him, two large dogs jump against a fence. The menacing animals were played by 2 Rottweilers named Dasia and Dominique. The trainers put the dogs on their marks and then stood on the other side of the fence using hand signals to cue the dogs to growl and bark.