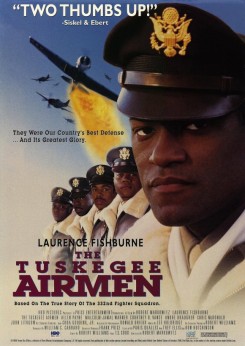 The Tuskegee Airmen is a sentimental film about the determination, tenacity and accomplishments of the first African-American combat squadron of the Army Air Force in World War II. It is a segregated, all black squadron and as such they face constant prejudice on both an individual and group basis. It is a familiar story as they work twice as hard to prove themselves in their desire to succeed as flyers for their country. Hannibal Lee is the dominant character throughout the film and ends up as a Captain. A lot of the story is based on fact and a historical highlight is when Eleanor Roosevelt visits and asks to go up in a plane piloted by the black pilot, Lee. It is after her subtle recognition that their spirit is revived enough to battle a congressman, John Lithgow, who claims to have scientific proof that Negroes are inferior in combat. They wanted to be allowed to go overseas and fly combat missions like the white squadrons. After some obstacles, they do indeed get their wish and distinguish themselves. The reputation of the 99th squadron was acknowledged by the military when they become a part of the all white 332nd Fighter Group. The Tuskegee Airmen never lost a single bomber to an enemy fighter during the war, and they came home with their share of medals. They became a proud part of early integration in the military in 1942.

While training at boot camp in Atlanta, Hannibal Lee walks by two dogs being held on leash by soldiers.