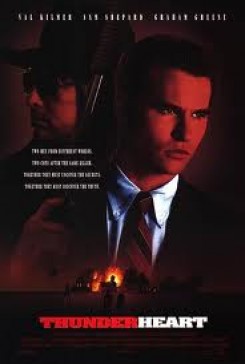 THUNDERHEART Rating: Acceptable Inspired by real events of the 1970's and filmed on an actual Indian reservation in South Dakota, Thunderheart weaves a tale of murder and intrigue and raises some serious questions about how our government has treated native Americans. The Director of the F.B.I. personally assigns Ray Levoi to investigate the murder of an Indian on a Sioux Reservation. After a series of incidents and confrontations between the government and Indians, tensions are high and the Director feels that sending Levoi, who is part Sioux, will help ease the situation. Levoi has never openly acknowledged his heritage and at first receives no more cooperation from the Indians than any other government agent would get. The government's prime suspect is Jimmy, a militant leader of Indian rights, but as Ray continues his investigation he is convinced that they are after the wrong man. As Ray comes to know the Indians the bond between them grows stronger. He is appalled at the government's lack of respect for Indian rites and the extreme poverty the Indians have endured. He befriends a school teacher, Maggy, a full blooded Indian, who is a Dartmouth graduate and dedicated to educating the Reservation's children. After several violent attacks on the Indians, Ray begins to suspect that there is more than a murder investigation at stake here. When he uncovers corrupt officials and evidence that would destroy the government's case, his life is in danger, which he faces head on. He has made the transition to Indian and the tribe's elder proclaims that Ray is "Thunderheart, he who has been sent to a troubled place to help his people." Ray's determination and total belief in his mystical powers as Thunderheart lead to an exciting climax.

When Ray first arrives and drives through the Reservation, several stray dogs can be seen amid the squalid atmosphere. The production company merely filmed existing dogs on the actual Reservation. A G-Man wants to gain access to a house and is told by an Indian that a house key is hidden in a coffee can. When the agent reaches in, his hand is bitten by a badger. This scene was shot in cuts with both a real and fake badger and a real and fake hand. The real badger was filmed separately and for an insert shot, food was placed on a fake hand for the badger to eat. As Ray searches outdoors he is startled by a deer running through the area and nearly shoots it. However, he just aims and doesn't fire. After Ray takes pity on a hungry three-legged dog and gives him some milk, the dog jumps into the cab of Ray's truck and refuses to leave. The dog becomes Ray's constant companion and goes everywhere with him. In one scene the dog jumps out of the window of the parked truck (an easy action for the dog) and in another scene the dog is in the cab with Ray as they are fired upon and the windows are shot out. This scene was shot in cuts. The windows were made of candy glass and were not shattered out, but cracked by an air gun (no missile going through the windows). The sound of the gunfire was added in post-production. An owl is seen briefly sitting on the sill of an open window. He then flies away. This was accomplished by a handler placing the owl in position on the sill with a tether attached to the owl's leg. When a trainer pulled on the tether the owl flew about ten feet to a soft grassy area where it landed. In an important plot development, a body is discovered with several coyotes growling and milling about it. To film this scene the area containing the coyotes was fenced in. Various animal scents were placed on parts of a dummy body to attract the coyotes to it. The trainers also called to them to get them to move around the body. In other animal action German Shepherds on leashes portrayed drug sniffing dogs (they were actually sniffing out food that had been strategically placed). In a dream sequence men on horseback chase Ray. Indian artifact props such as an eagle feather and a turtle shell rattle were obtained from an Indian crafts supplier.